Published by
Federica Laricchia,
Mar 22, 2022
Although Brazil has been considered a growing technology hub for several years, digital transformation in the Latin American country was accelerated by the coronavirus pandemic, with consumers and businesses experimenting with new technology solutions. Digital transformation is far to be over, and the entire continent is said to be experiencing the second wave of digital transformation. The consumer electronics industry in Brazil is a key part of the digitalization process in the country, notably with many devices – TVs, smartphones, computers, wearables, speakers, and headphones – of growing importance to consumers. Particularly, during a 2021 survey, it was found that smartphones and headphones are among the most used electronic devices in Brazil.

Brazil is said to be one of the five countries with the highest number of smartphone users. In the coming years, such a trend will not go away, with the number of Brazilian smartphone users set to increase further. For instance, by 2025, almost 83 percent of the population is forecast to use a smartphone. In 2021, Samsung was the leading smartphone vendor, occupying 44 percent of the market. Samsung was also the leading tablet vendor, a market which is forecast to have over 71 million users by 2025. In line with this, the computer market in Brazil, which includes desktop PCs, laptops, and tablets, is forecast to grow in the coming years, with expected revenue of over 10 billion U.S. dollars in 2025.

Impact of the pandemic

On the one hand, COVID-19 restrictions have exacerbated our need to live in a comfortable, smart, and entertaining space. During the pandemic years, TV unit sales increased and smart speakers gained popularity. On the other hand, the pandemic made health and healthy lifestyles primary concerns, with people using wearables like fitness trackers and smartwatches. In Brazil, around 615 million units were sold at the beginning of 2021, generating a revenue of 415 million Brazilian reals (81.31 million U.S. dollars).

Via: the leading consumer electronics retailer in Brazil

One of the most famous retail companies in Brazil is Via, formerly Via Varejo, specializing in consumer electronics and household appliances. In the last years, Via’s net revenue increased, peaking at 28.9 billion Brazilian reals (5.66 billion U.S. dollars) in 2020. Whether in-store or online, at Via, Brazilian shoppers can find their favorite consumer electronics companies, such as Samsung. Whirlpool and Electrolux.

In the following 8 chapters, you will quickly find the 41 most important statistics relating to "Consumer electronics in Brazil". 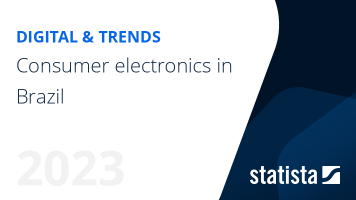 The most important key figures provide you with a compact summary of the topic of "Consumer electronics in Brazil" and take you straight to the corresponding statistics.