Published by
Jang Seob Yoon,
May 23, 2022
The SK Group is one of South Korea’s major conglomerates alongside Samsung, Hyundai, and LG. The company boasts an annual revenue of almost one hundred trillion South Korean won, and holds ownership over multiple subsidiary companies which are located not only in South Korea but also around the world. Companies under the SK banner operate in a wide range of business areas, which include telecommunications, refinery, semiconductors, and much more. First established in 1953 as a clothing company, the SK Group has managed to grow its business into a leading multinational corporation.

Subsidiaries of the SK Group are among the leading companies in their respective industries. In the South Korean telecommunications industry, SK Telecom is the leading mobile operator, beating other large companies such as LG and KT to the top spot. Another example would be how companies such as SK Innovation and SK Incheon Petrochem are among the leaders of the domestic refinery industry. Moreover, a popular e-commerce company in South Korea, 11Street, is a part of the SK Group. The SK brand is also a sponsor for football and basketball teams in the professional sports scene in South Korea.

A high-tech future for SK

What is noteworthy about SK is the attention it turns toward the future. Due to their widespread use in modern electrical products, semiconductors are in high demand around the world for the foreseeable future. SK Group is already well-placed in the industry, with SK Hynix among the leading semiconductor producers worldwide. For the energy sector, SK E&S recently had a new fuel cell power plant commence operations to produce more sustainable energy. Additionally, SK Telecom leads the way in 5G subscriptions in South Korea, which is another demonstration of its strong position in the telecommunications industry.

In the following 4 chapters, you will quickly find the 31 most important statistics relating to "SK Group of South Korea ". 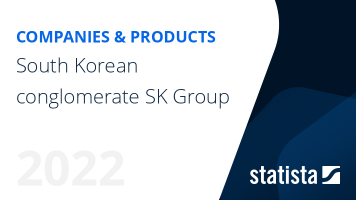 The most important key figures provide you with a compact summary of the topic of "SK Group of South Korea " and take you straight to the corresponding statistics.