Published by
Federica Laricchia,
Jun 15, 2022
With the expansion of the Internet of Things (IoT), the security of smart devices has become of primary concern. The concept consumer tech device security can mean different things and its applications include products like smartphones and PCs as well as smart home security devices such as smart security cameras. Furthermore, such security can be guaranteed in a variety of ways, for example through IT security services and biometric technology. Particularly, the use of biometric authentication and identification has developed in recent years, with mobile device access and banking being among their most common uses.

Nowadays people store important information on their electronic devices, especially smartphones, with consumers often making purchases via mobile services like PayPal and Apple Pay. However, smartphone users may be at risk, for example having their devices accessed by cybercriminals and, therefore, want to protect their devices. When talking about the security of consumer electronics, we can think of unlocking our smartphones through fingerprint and/or facial recognition sensors. Both the fingerprint sensor and facial recognition markets are expected to grow in the coming years. Indeed, the number of fingerprint sensors shipped worldwide amounted to around 380 million in 2021, while the facial recognition market size is forecast to peak at 12.9 billion U.S. dollars by 2027.
There is also the possibility for consumers to set up passwords to control who accesses their devices or download firewalls and antivirus software to protect them from computer threats like ransomware and spams. For instance, Bitdefender and Kasperksy are said to provide the best protection against the above-mentioned threats, while Simantec Corporation and McAfee are the best vendors for Windows anti-malware applications.

Security is one of the main goals people want to achieve when making their homes smart. In fact, the smart home security market has grown significantly in the last five years and is expected to reach a revenue figure of over five billion U.S. dollars by 2025. The market is made up of several products such as smart security cameras, smart locks and doorbells, and motion detectors. Despite growing on a global level, the United States and China rule over this market, with expected revenues of 8.95 and 6.76 billion U.S. dollars, respectively, in 2026.

The other side of the coin: consumers’ concerns

In the following 6 chapters, you will quickly find the 34 most important statistics relating to "Security of consumer tech devices ". 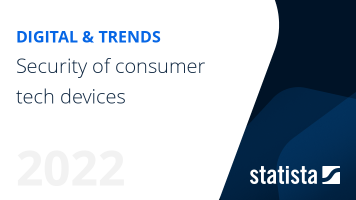 The most important key figures provide you with a compact summary of the topic of "Security of consumer tech devices " and take you straight to the corresponding statistics.