IT industry in Russia - statistics & facts

Published by Statista Research Department, Nov 17, 2022
The Russian information technology (IT) sector has been steadily developing recently. In total, spending on digital economy accounted for 3.8 percent of the country's gross domestic product (GDP) in 2020, gradually increasing since 2017. Import substitution is a trend that has dominated the industry since 2014, which has benefited domestic market leaders, such as Lanit, Softline, and Croc. Furthermore, the industry has seen a continuous increase in fixed capital investment, which amounted to nearly 848 billion Russian rubles in 2020. Nevertheless, the sector was still highly dependent on imports. Throughout 2021, imports of information and communication (ICT) services into the country rose every quarter.

Key segments of the Russian IT industry

Import substitution in the Russian IT industry

Over the past decade, the Russian government has encouraged import substitution in the IT industry by providing subsidies to companies that developed solutions to replace foreign products. The revenue of Russian software companies from sales within the country steadily increased from 5.6 billion U.S. dollars in 2015 to 9.5 billion U.S. dollars in 2020. The Western countries' ban on high-tech goods to Russia due to its invasion of Ukraine in 2022 created an even higher demand for domestic hardware and software. Moreover, in response to the war, several international vendors either suspended new sales (such as Microsoft) or completely withdrew from Russia (such as TeamViewer), pushing corporate and private consumers to search for domestic alternatives. As a result, the IT spending in Russia was forecast to reach 19.1 billion U.S. dollars in 2022, down 38 percent from the previous year.

In the following 6 chapters, you will quickly find the 47 most important statistics relating to "IT industry in Russia".

Statistics on the topic
IT market revenue
25.35bn USD
Largest segment by revenue
IT equipment
Number of IT entities
50.7k 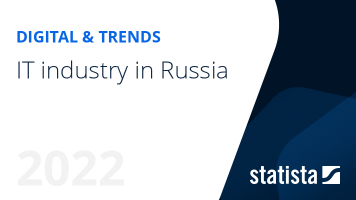 Go to report IT industry in Russia
Top Seller

The most important key figures provide you with a compact summary of the topic of "IT industry in Russia" and take you straight to the corresponding statistics.

IT industry in Germany