Published by
Aaron O'Neill,
Jun 3, 2022
In its simplest terms, human migration is the movement of individuals or larger populations from one geographical region to another. Migration can be classified in many different ways, depending on its cause and scope, and people may migrate based on a variety of push and pull factors. Pull factors “pull” people toward a region and tend to be more positive, such as economic or education opportunities, higher living standards, and personal connections. Push factors, in contrast, “push” people away from an area, and may apply to issues such as unemployment or low wages, poor education or healthcare systems, and low living standards. Push factors may also be more severe, such as conflict, persecution, and food instability, and these can lead to displacement or refugee crises.

Historically, internal migration, i.e. movement within one country, has been the most common form of migration. This is particularly true as societies industrialize; the labor demands in rural areas are lowered through improvements in agricultural technology, therefore urbanization increases as people move in search of work in towns and cities. 2007 marked the first year when more of the world’s population lived in an urban setting than in rural areas, and the share of the world’s urban population is expected to reach almost 70 percent in the next three decades. Drivers for internal migration are generally economic, but are also more likely to be affected by education, housing, or social opportunities when compared with international migration.

International economic migration is where individuals or groups move because of or in search of work. It may be permanent or temporary and is most commonly (but not limited to) migration from poorer to richer regions. In many more developed countries, migrant workers make up a disproportionate share of employees in low-skilled, low-paying jobs; jobs that domestic workers often avoid. This also includes seasonal migrants, who may travel for work in sectors such as agriculture or tourism depending on the time of year. Remittances, i.e. money sent from migrant workers back to their home countries, are essential for millions of families across the world, and for several national economies; global remittance flows are expected to total at well over 700 billion U.S. dollars in 2022, and remittances make up a large share of total GDP in many countries (over 20 percent in at least 11 countries).

Human capital flight, also known as “brain drain”, refers to the international movement of educated or skilled workers. This is often considered a problem by the countries of origin, as their economies lose specialized workers to other regions. However, many consider this process to be more economically beneficial, as foreign workers may send money home, help establish or strengthen international trade, and bring back new skills or knowledge through return migration. Similarly, human capital flight is widely considered to be beneficial for the receiving country due to the “brain gain” as well as remittance fees, but it can increase competitiveness in labor markets and may devalue the qualifications of domestic workers. Studies show that migration between countries of different development levels also promotes democratization, liberalization, and gender equality in less developed countries, and may alleviate some of the demographic challenges posed by low fertility and population aging in more developed countries.

Forced migration occurs when people feel there is no choice but to leave their homes due to threats such as conflict, human rights violations, and economic instability (oftentimes a combination of these). Internal displacement can put a significant amount of strain on local resources, while international displacement on a large scale can overwhelm or place a heavy burden on the receiving country. Forced migration has played a considerable role throughout history, including transatlantic slavery, resettlement due to the world wars, or during the partition of India, each of which saw over ten million people internationally resettled by force. However, current crises are resulting in more displaced persons than ever; the UN estimated that there were over 86 million forcibly displaced persons at the end of 2021, including 27 million refugees and 51 million internally displaced persons. In 2021 alone, over 14 million people were displaced due to conflict and violence.

Climate or environmental migration is an additional phenomenon that has emerged in recent decades, and is a form of forced displacement. This may be temporary displacement to evade natural disasters, or more permanent migration due to climate change. Rising temperatures and more frequent natural disasters are exacerbating already-existing instabilities in some regions, forcing people to move as their homes become increasingly inhospitable and as food production or water access becomes less viable. Climate migration is most common in dry or tropical climates; rising sea waters are threatening the very existence of many island nations and coastal settlements; flooding causes over-salination of agricultural land; and drought leads to water scarcity and crop failure. Control over food and water supplies can become increasingly important during conflict, and conflict can prevent humanitarian aid from reaching those who need it most - of the 10 countries listed as “alarming” in the 2021 Global Hunger Index, seven were the site of an ongoing civil war or perpetual armed conflict.

There is no set legal definition of a climate migrant or environmental refugee, and overlap with displacement caused by conflict in affected areas has made statistical categorization difficult, however, in 2020, the UN Human Rights Committee determined that countries may not deport people who have sought asylum due to climate-related threats. Estimates for the number of people affected today or in the coming decades are generally in the hundreds of millions, and UN experts have also warned of climate apartheid developing in the future, where wealthy societies can avoid many of the negative aspects of climate change while the rest of the world is vulnerable.

The most important key figures provide you with a compact summary of the topic of "Migration" and take you straight to the corresponding statistics.

Migration and integration in Germany 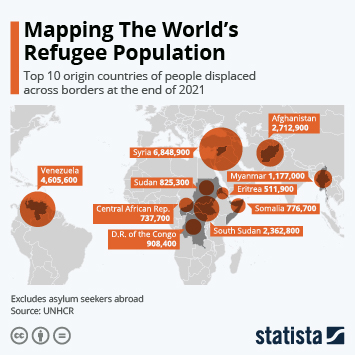