Published by S. O'Dea, Jun 27, 2022
Samsung is consistently one of the world‘s leading smartphone manufacturers, jostling with Apple for the top spot. While the Samsung S series of phones compete directly with Apple’s iPhone, the company gives itself an advantage in the market by also placing significant emphasis on mid-range smartphones, offering flagship-like features with a much lower price tag.
What the mid-range phones lack in price they make up for in volume, making up 59 percent of Samsung’s smartphone sales in Europe in 2021. Samsung also has an advantage over Apple in markets in which affordability is a greater concern, including Africa.

Samsung launched the first Samsung Galaxy S in June 2010, running TouchWiz, their own customised version of the android operating system. Featuring a 4.0” Super AMOLED display, expandable storage, a 5-megapixel rear-facing camera and a 0.3-megapixel front-facing camera, consumers and industry media received the phone favourably. The Galaxy S was able to find its footing against competitors such as HTC, Experia, the Nexus One, and the iPhone 4, creating a strong foundation for future Galaxy S models.

Since then, Samsung’s mobile business has grown significantly. In the first quarter of 2010, Samsung shipped just 2.4 million smartphones. As of the fourth quarter of 2021, that figure reached 68.9 million units, recovering strongly from the initial impacts of the coronavirus (COVID-19) pandemic.

Taking on the tablet market

Samsung entered the tablet market during September 2010, with the Samsung Galaxy Tab 7.0, the first tablet to be sold with the android operating system. The market is a lucrative one, with the global tablet market is expected to be worth over 40 billion U.S. dollars in 2022.

The company has gone on to become the second-largest force in the tablet market shipping 30.8 million units in 2021. While Samsung outsell any other android-based tablet, Apple remain the clear market leader, shipping 57.8 million units throughout 2021. Although Apple remain the strongest force, Samsung have gained significant ground in terms of tablet market share, rising from 7.3 percent in 2011, to 15.9 percent in the fourth quarter of 2021.

In the following 5 chapters, you will quickly find the 30 most important statistics relating to "Samsung mobile devices". 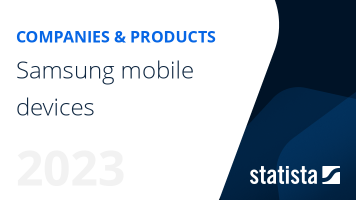 The most important key figures provide you with a compact summary of the topic of "Samsung mobile devices" and take you straight to the corresponding statistics.