Russia was the eighth largest dating services market worldwide in revenue, measuring at 217 million U.S. dollars in 2021. The country's large population and high internet and smartphone penetration offered favorable conditions to the industry. However, online dating in Russia is less popular than in many other countries. In 2021, only four percent of Russian singles used dating services, compared to 22 percent in Brazil and 20 percent in India. The number of dating users in Russia reached approximately 17 million in 2021, representing over 11 percent of all residents.

How has online dating in Russia developed over the past 20 years?

Online dating in Russia first developed hand-in-hand with social media platforms. When networks like OK (Odnoklassniki) and VK (Vkontakte) first appeared in the 2000s, their users utilized them to connect with friends and search for partners. At that time, there were no smartphones in the country, so Russians mostly used these platforms from desktop devices. Besides social networks, dating portals like Loveplanet and Mamba emerged in that decade.
In the 2010s, users started using dating apps from their mobile devices; however, desktop platforms have not lost popularity. The coronavirus (COVID-19) pandemic accelerated the market growth in 2020 and 2021, with two in 10 dating app users reporting that they started using such products due to social distancing — the segment of online dating platforms led by revenue in 2021 at 100 million U.S. dollars. However, the steadily growing matchmaking segment was forecast to almost catch up and reach 94 million U.S. dollars in 2026.

The Russian dating service Mamba was the most popular in terms of web traffic, with nearly 17.6 million average monthly visits between January 2021 and January 2022. Mamba operates both as a website and a mobile app. Based on new downloads, the leading dating app was Badoo, registered in Cyprus and headquartered in the United Kingdom (UK). Russian entrepreneur Andrey Andreev founded both Mamba and Badoo. Tinder was the country's primary foreign provider of dating services, having earned the largest in-app revenue of nearly 7.5 million U.S. dollars in 2021. In response to the Russian invasion of Ukraine in 2022, Tinder disabled paid functions in its app for Russian users, while Badoo and Bumble blocked new downloads in Apple App Store and Google Play Store in Russia.
This text provides general information. Statista assumes no liability for the information given being complete or correct. Due to varying update cycles, statistics can display more up-to-date data than referenced in the text.
Published by Statista Research Department, Jul 8, 2022

Most downloaded dating apps in Russia 2022

Most downloaded dating apps in Russia 2022 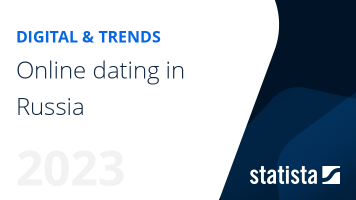 The most important key figures provide you with a compact summary of the topic of "Online dating in Russia" and take you straight to the corresponding statistics.