Published by
Thomas Alsop,
Jul 1, 2022
The semiconductor industry can be categorized into three distinct stages: design, fabrication, and assembly. Companies that perform all three of these steps are referred to as integrated device manufacturers (IDMs), with examples including Samsung and Intel. Firms that only design chips, known as fabless companies, do not own any production facilities. The actual production or fabrication of semiconductors is outsourced to foundry companies.

A foundry is a company that manufactures chips in a fabrication plant (fab). Such firms rely on semiconductor manufacturing equipment and materials to fabricate a chip design on a silicon wafer. Wafer fabrication is a highly capital-intensive process and requires extensive and deep knowledge, especially in the production of the most powerful, innovative chips needed in modern electronics and applications. As a result, the foundry market is concentrated among a few players in specific regions around the world: Taiwan alone accounts for around 65 percent of revenues generated by the global semiconductor foundry market.

The foundry market leader is Taiwan Semiconductor Manufacturing Company (TSMC), with the company contracted to complete fabrication tasks for a variety of customers including Apple, AMD, and Qualcomm. TSMC occupies around 50 percent of the foundry market, with competitors including the likes of Samsung in South Korea, GlobalFoundries in the United States, and Semiconductor Manufacturing International Corporation (SMIC) in China.

A global chip shortage – the result of surges in demand and an imbalance in the semiconductor supply chain – has forced semiconductor companies to explore methods of increasing chip manufacturing capacity. TSMC and Samsung have both announced investments that will support capacity increases, particularly in the development of new fabrication plants. Intel has also committed to supporting the semiconductor ecosystem in providing greater capacity, notably through the creation of Intel Foundry Services where it will be using its fabs to produce chips for other firms as well as its own. In addition to the semiconductor companies themselves, governments too have begun to invest heavily in chip manufacturing capabilities, with the U.S., Europe, and China all vying to have manufacturers produce more chips domestically.

In the following 6 chapters, you will quickly find the 27 most important statistics relating to "Semiconductor foundries". 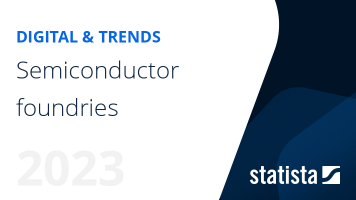 The most important key figures provide you with a compact summary of the topic of "Semiconductor foundries" and take you straight to the corresponding statistics. 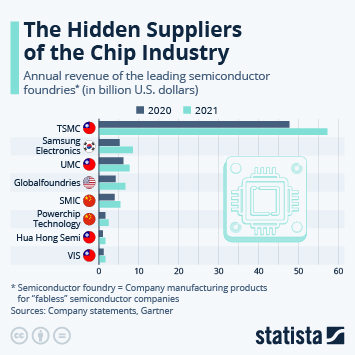