Published by Statista Research Department, Aug 2, 2022
Japan is one of the major markets for household appliances in the Asia-Pacific region. In a narrow sense, the category of household appliances contains a number of different types of electric appliances designed to assist people in the household. One can differentiate between major appliances, such as washing machines, refrigerators, and air conditioners, and small appliances, such as vacuum cleaners, microwaves, and electric rice cookers. Japan, which is home to a high number of affluent consumers, constitutes a large market for these types of goods. Based on shipment value, the market size of household appliances was estimated at around 8.1 trillion Japanese yen in fiscal year 2021. There are a number of appliance manufacturers in Japan that have become well-known brands internationally, such as Panasonic, Hitachi, Fujitsu, and Mitsubishi Electric, but competition from manufacturers in other countries, such as China and South Korea, has put pressure on domestic companies. This has not only lowered the prices for various goods, but also led to several Japanese companies selling parts of their businesses to foreign competitors.

One major strategy Japanese manufacturers employ in order to stay competitive is to develop products with enhanced efficiency and new functions. Just as in the case of smart devices, these newly added functions are supposed to make the daily lives of consumers more convenient and comfortable. For instance, home appliances increasingly offer automation and remote control, which save time and energy. Washing machines can automatically adjust the detergent to the load of clothes to be washed, while refrigerators can notify users if certain items, such as drinks, are out of stock. At the same time, the increasing dependence on Internet of Things (IoT) technology also makes security measures necessary in order to protect the privacy of users and to prevent any unwanted manipulation of appliances. Smart appliances account for the largest share of the smart home market in Japan and are expected to grow further in absolute terms in the coming years.

Appliances in the daily lives of consumers

The history of household appliances in Japan is closely linked to the economic development of the country. In the second half of the 1950s, when Japan’s economy grew at a high pace and more and more people moved to urban areas, major appliances such as refrigerators and washing machines became a symbol of the middle-class lifestyle many people aspired to. Today, it is very common for households to own a wide variety of home appliances. As survey figures on the household penetration rate of kitchen appliances show, goods such as refrigerators, microwaves, and rice cookers are owned by the vast majority of Japanese households. Partly due to the hot and humid summer, average annual household expenditures are particularly high in the case of air conditioners. A majority of survey respondents states to be aware of times when one can buy household appliances at a bargain price, which indicates a certain level of price-consciousness among Japanese consumers. One newly emerging phenomenon are subscription services for household appliances, which enable people to try out and use the most advanced technology without having to pay the full price.

In the following 6 chapters, you will quickly find the 31 most important statistics relating to "Household appliances in Japan". 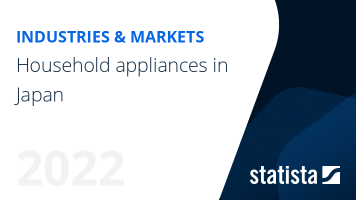 The most important key figures provide you with a compact summary of the topic of "Household appliances in Japan" and take you straight to the corresponding statistics.

Science and research in Japan