The Japanese software industry is one of the largest sectors within the Japanese information and communications technology (ICT) industry. As the daily lives of people are increasingly influenced by the process of digitalization and other technological advances, software development and related products have become more and more important. The sales of the software industry grew considerably in the recent years and reached a value of almost 16.7 trillion Japanese yen in the 2020 fiscal year. The industry is also an important source of employment, as more than 800 thousand people are employed at software companies. In general, the industry can be divided into four segments: programming services, system services, open source, and software as a service (SaaS). Despite its size and importance, it has been perceived as lacking in international competitiveness, although this perception does not apply to all areas equally.

The development of the software industry in Japan has partly been hampered by the high prestige enjoyed by the domestic hardware and manufacturing industries. These are areas in which Japanese companies excelled internationally and were able to pay better salaries, which made them highly attractive for young talent. Software-related tasks were often solved by outsourcing to other companies or handled by subsidiaries, which led to a high degree of customization that hindered the development of widely applicable software products. According to one survey, the leading customer industries for subcontracting software development companies are IT and manufacturing, and the most common project types are the development of mission-critical systems and business support systems. Despite the importance of software for many business areas, software engineers often do not enjoy the same degree of recognition that their counterparts in other countries do, which is in part a result of the prevalence of subcontracting. In addition, a widespread lack of English proficiency often makes it necessary to translate code into Japanese, which leads to a significant delay in the adoption of newer global developments. On the upside, the Japanese software industry is usually highly regarded when it comes to embedded software that is used in key industries such as automobiles or consumer electronics. An additional area of success is gaming software, as Japanese companies have exerted a tremendous influence on the global video game industry since the 1980s.

Plans for the future

It is expected that the market for software will grow further in the coming years. While some markets are projected to grow slowly but steadily, others, such as blockchain-utilized services, are expected to multiply in size over the next years. One major vision for policymakers is the concept of “Society 5.0,” which was introduced by the Council for Science, Technology and Innovation (CSTI) in 2016 as a part of the Fifth Science and Technology Basic Plan. The concept describes the vision of a society in which cyberspace and the physical world are increasingly interconnected. This approach is supposed to boost economic development and to help in solving various social issues, such as the challenges posed by demographic ageing and the depopulation of rural areas. A number of important technologies that factor into this, such as artificial intelligence (AI), big data, the Internet of Things (IoT), and robotics, rely on products and services of the software industry. One crucial task for Japan will be to nurture a workforce that possesses the skills necessary to realize these technological changes, which, as the Ministry of Education, Culture, Sports, Science and Technology (MEXT) has outlined, requires a different approach to learning that is more conducive to furthering innovation.
This text provides general information. Statista assumes no liability for the information given being complete or correct. Due to varying update cycles, statistics can display more up-to-date data than referenced in the text.
Published by Statista Research Department, Oct 7, 2022

Number of people working in the software industry
837.6k

Number of employees of software companies Japan 2020, by gender 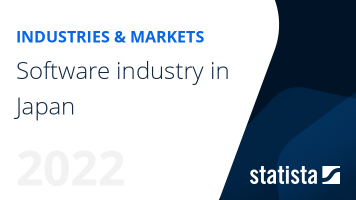 The most important key figures provide you with a compact summary of the topic of "Software industry in Japan" and take you straight to the corresponding statistics.