América Móvil is a Mexican telecommunication company founded in 2001. Headquartered in Mexico City, América Móvil is one of the biggest companies in the world, totaling 367 million subscribers as of 2021. Moreover, not counting China and India, América Móvil is the largest company regarding the number of wireless subscribers. Since 2019, the telecommunication corporation has been generating revenues worth approximately 850 billion Mexican pesos, exceeding one trillion Mexican pesos in 2017 and 2018. As of 2021, the company peaked its net profit at around 196 million pesos, up from just 51 million pesos a year earlier.

The company has had a fascinating development over the years. In 2006, América Móvil acquired Verizon’s operations in Latin America, expanding its coverage from 14 to 17 countries, by adding Puerto Rico, the Dominican Republic, and Venezuela. Subsequently, it unified its brands under its brand, Claro. In 2007, América Móvil acquired the Jamaican mobile operator Oceanic Digital – a transaction worth 70 million U.S. dollars. In 2010, América Móvil’s owner, Carlos Slim, offered 21 billion U.S. dollars to purchase Telmex, in order to ensure a competitive advantage against Telefonica. The transaction was all the more controversial since América Móvil was founded as a result of Telmex’s spin off between its wireless mobile activities and its landline and internet services. Shortly after, Carlos Slim, was named the richest man in the world by Forbes Magazine in 2010 and 2011, surpassing Bill Gates.
However, not every acquisition attempt succeeded. In 2013, América Móvil offered to purchase 70 percent of the shares of the Dutch telecommunications company, KPN. América Móvil withdrew its offer shortly after several governmental and corporate responses showed disapproval of the imminent hostile takeover. Last but not least, in 2019, América Móvil announced that it would acquire Telefonica’s operations in Guatemala and El Salvador. Nevertheless, the agreement for Telefonica’s operations in El Salvador was canceled by mutual agreement in 2020 due to disadvantageous regulatory conditions in the country.

In 2021, América Móvil was by far the largest telecommunications company in Mexico, generating revenues worth 338 billion Mexican pesos in the Latin American country. By contrast, Grupo Televisa – the second largest telco company in Mexico - registered revenues amounting to only 58 billion Mexican pesos. The company’s second most valuable market resides in Brazil, followed by Europe, with both regions recording revenues of over 100 million Mexican pesos each. However, Brazil is the leading market when it comes to the number of fixed-line subscribers, while Mexico has the highest number of wireless subscribers. In terms of employment, in 2021, approximately 48 percent of América Móvil’s employees were based in Mexico.
This text provides general information. Statista assumes no liability for the information given being complete or correct. Due to varying update cycles, statistics can display more up-to-date data than referenced in the text. 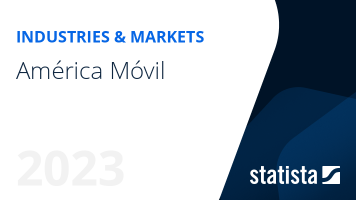 The most important key figures provide you with a compact summary of the topic of "América Móvil" and take you straight to the corresponding statistics.