With a young population and high internet penetration levels, Saudi Arabian users are more active than ever on social media. Saudi Arabia is among the top ten countries worldwide with a high internet penetration rate. In 2022, the vast majority of the population in Saudi Arabia were mobile internet users. Social networking sites like Facebook, Twitter, and Instagram created a way for family and friends to connect, enabled content creators to share information, and widened the reach of promotional marketing through online ads. These factors contributed to social media being an integral part of Saudi Arabian daily life.

Social media has grown into more than just platforms for people to connect online; it is integrated more than ever into users’ daily lives. As a result, social commerce has emerged, in which consumers can browse and purchase items through their social media accounts. Even if the purchase is not executed via social media accounts, it is a crucial tool for brand awareness and marketing. YouTube had the highest potential ad reach among social media platforms in Saudi Arabia, with a share of around 91 percent. Nowadays, many businesses prioritize their social media presence to engage with consumers and promote products, in addition to procuring influencers to market their products.
This text provides general information. Statista assumes no liability for the information given being complete or correct. Due to varying update cycles, statistics can display more up-to-date data than referenced in the text.
Published by Statista Research Department, Sep 26, 2022 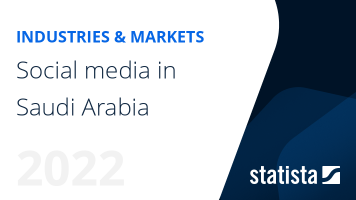 The most important key figures provide you with a compact summary of the topic of "Social media usage in Saudi Arabia" and take you straight to the corresponding statistics.