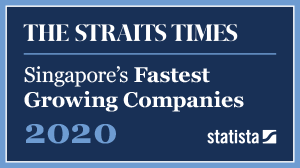 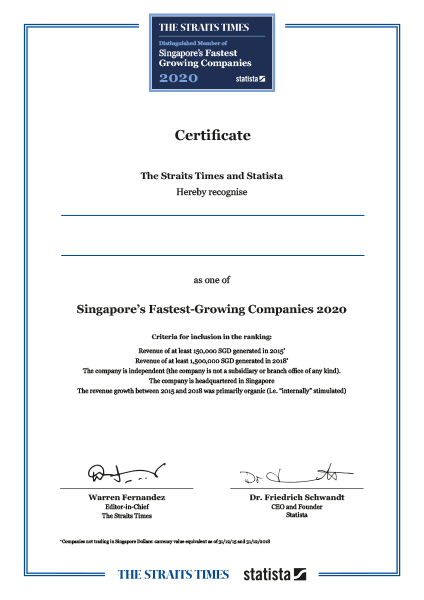 Use the Straits Times Logo…*

Singapore's Fastest Growing Companies 2020 is a lost of the top 100 companies in Singapore that have achieved the highest percentage growth in revenues between 2015 and 2018.

Application phase
The project was advertised online and in print, allowing all eligible companies to register via the websites created by Statista and the Straits Times. In addition, through research in company databases and other public sources Statista has identified thousands of companies in Europe as potential candidates for the ranking. These companies were invited to participate in the competition by post, email and telephone. The application phase ran from May to September 2019. The submitted revenue figures had to be certified by the CFO, CEO or a member of the Executive Committee of the company.

To be included in the list of fast-growing companies in Singapore, a company had to meet the following criteria:

The ranking of the Singapore's Fastest Growing Companies 2020was created through a complex procedure. Although the search was very extensive, the ranking does not claim to be complete, as some companies did not want to make their figures public or did not participate for other reasons.