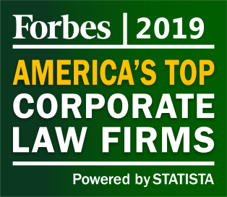 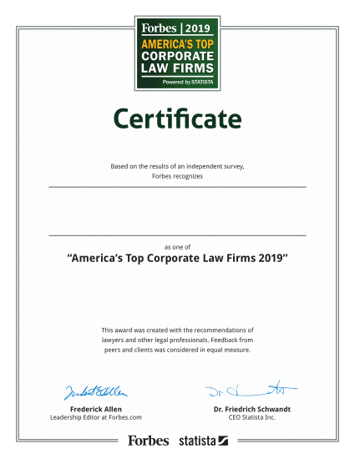 Use the Forbes Logo…*

For the top lists of “America’s Top Corporate Law Firms 2019” Statista, the independent research institute and statistics platform, conducted a broad survey among lawyers and In-house lawyers in the United States. The survey took place between 1st April 2019 and 17th May 2019. Based on the results, Statista identified the most recommended Corporate Law Firms in America.

Who took part in the survey?

For the evaluation of America’s Top Corporate Law Firms, we invited lawyers ("peers") and In-house lawyers ("clients") to take part in the survey.

How did the survey take place?

The survey was conducted online. All lawyers received a survey invitation via a personalized email. In addition, lawyers were recruited directly via a carefully profiled online-access-panel.

The participants had to specify their professional activity first. Lawyers then had the opportunity to select areas of law where they themselves are involved and have expertise. At the end of the survey, they were also able to indicate how many years they had been active as a lawyer on a voluntary basis.

Subsequently, all participants were asked to make their recommendations for law firms in two steps. First, they selected the areas of law for which they wanted to make recommendations. Then up to 10 recommendations could be made per selected area of law. The recommendation was aided by an autocomplete function, which showed law firms from a preselected longlist of more than 1,000 law firms based on the already entered letters. Of course, it was also possible to freely specify any other law firm.

The law firms that received most recommendations made it into the top lists.

For each law firm, the field of law where it received the most recommendations was identified and highlighted as “most recommended for”. Since some boutique law firms state that they concentrate on a narrow selection of fields of law, specific industries etc. this “exclusive focus” was also highlighted in the final lists.

The ranking was created through an intricate process. The quality of law firms that are not included in the lists is not disputed.

Use of the label in your promotional materials is only permitted unmodified and only for a period of one year. You may not attribute any statement of fact to Forbes other than your placement on the list in your respective industry. You alone are responsible for the admissibility of the commercial use of the seal under competition law; in this respect, Forbes and Statista give no guarantee and assume no liability. In consideration for payment, you (The Licensee) are hereby granted a nonexclusive, worldwide, non-transferable, non-sub-licensable license during the term of this Agreement for digital use rights (web posting, email, digital presentations, branded social media and similar) and print reproduction use rights (letterhead, sales materials, reports, white papers, brochures, posters and signage and similar) of the Forbes Logo (The Logo) pictured in this agreement. Licensee acknowledges and agrees that The Logo and all right, title and interest therein, is and shall remain the exclusive property of FM. Licensee shall not distort, misrepresent, alter the meaning of or otherwise edit The Logo. FM may terminate this Agreement upon 30 days’ written notice if Licensee materially breaches any of the terms of this Agreement; provided, however, that this Agreement will not terminate if the breaching party has substantially cured the breach to the reasonable satisfaction of FM within 30 days of a notice pursuant to this section. Upon termination or expiration of this Agreement, Licensee’s right to use The Logo shall immediately terminate and all rights granted to Licensee hereunder with respect to The Logo shall automatically revert to FM without further notice. This Agreement contains the full and complete understanding of the parties with respect to the subject matter hereof and supersedes all prior representations and understanding, whether oral or written. This Agreement shall be construed and the rights and obligations of the parties shall be governed by the laws of the State of New York.