11.12.2019 The plastic dilemma: 348 million tons of plastic produced per year worldwide, half of which becomes waste

Hamburg, December 11, 2019 - The world is experiencing a severe plastic waste crisis, primarily due to the enormous amount of plastic manufactured and the state of plastic waste management. Globally, manufactures produce 348 million tons of plastic each year, compared to 1.5 million tons in 1950. In Europe, only 30% of plastic waste gets recycled, meaning it is collected and treated but not entirely returned into the production system. In the most recent DossierPlus on the topic, researchers from Statista present the status quo of plastic waste treatment and how plastic impacts the environment.

Europe alone produces 60 million tons of plastic. Drastic measures taken by the European Environmental Agency (EEA) have shown to be vital in reducing potentially ruinous levels of waste generation. The measures aim mostly on reducing the use of single-use plastics and packaging, as those are the biggest culprits when it comes to plastic waste. The data reveals significant differences in selected EU countries when it comes to waste treatment. In Germany, for instance, only 0.1 percent of plastic packaging ends up in landfills, while Spain reported 38.2 percent of packaging in landfills. 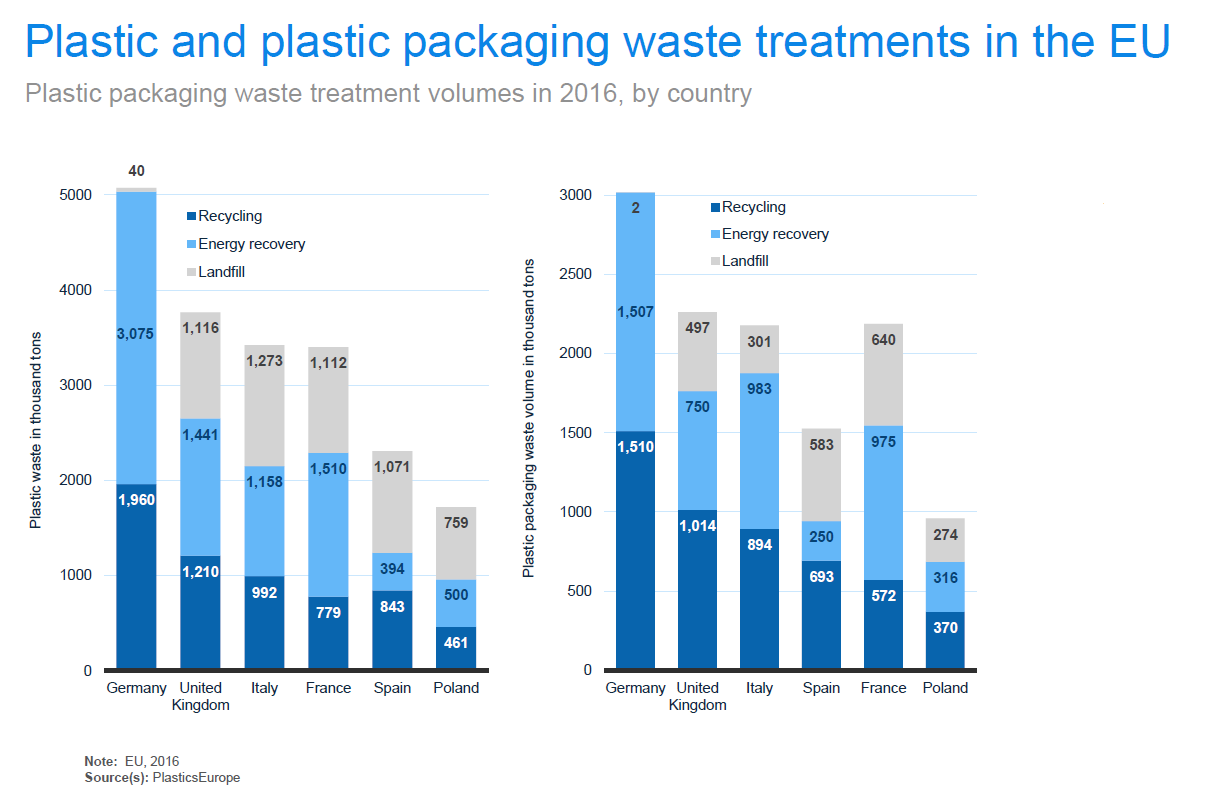 Data looking at the trade of plastic reveals the potential impact of China banning the importation of foreign plastic waste in 2018. The measure shocked the global scrap trade and forced western countries to rethink the recycling agenda. According to the University of Georgia’s forecasts, by 2030, almost 111 million tons of plastic waste worldwide will need to be processed elsewhere, if China continues its ban of plastic disposal. 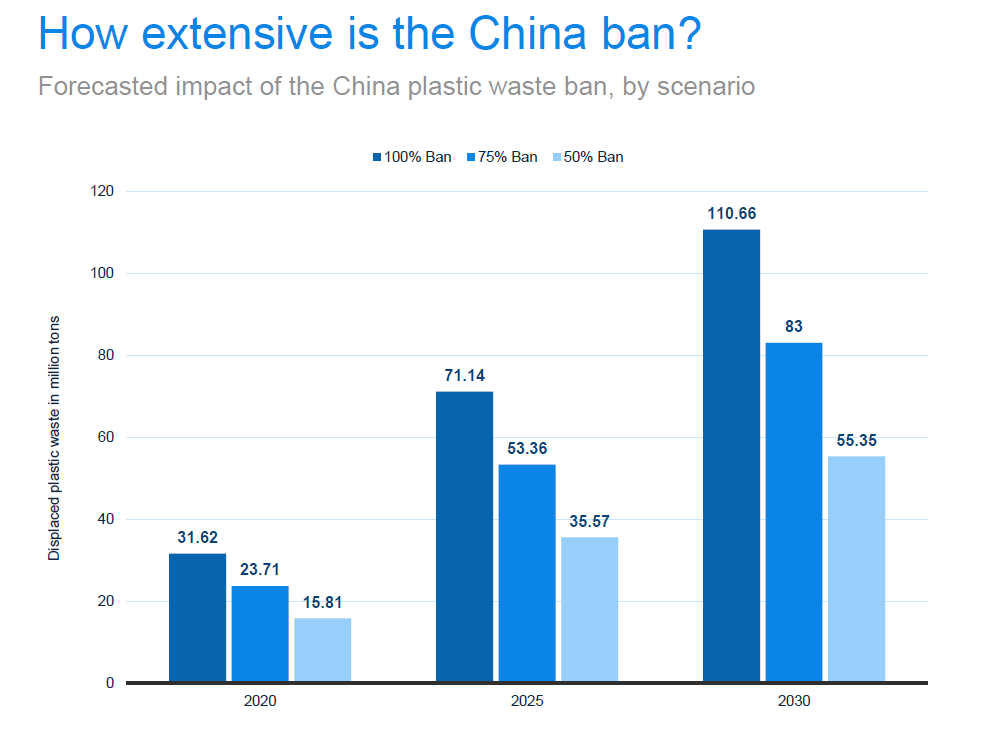 The DossierPlus also investigates the negative impacts of plastic production on the environment, including its impact on emissions and therefore climate change, as well as health risks caused by pollution.

Discarded plastic degrades into small particles that contaminate the environment. These microplastics end up in oceans, fishes’ organs and even the human food chain and are intentionally added to a long list of products in the cosmetic industry. Most clothing is also made from synthetic fabric containing plastic microfibers which additionally end up in wastewaters.

With bio-based plastic as a controversial alternative for sustainability, the report suggests rethinking the lifecycle of plastic products starting from material design. The full report is available here. 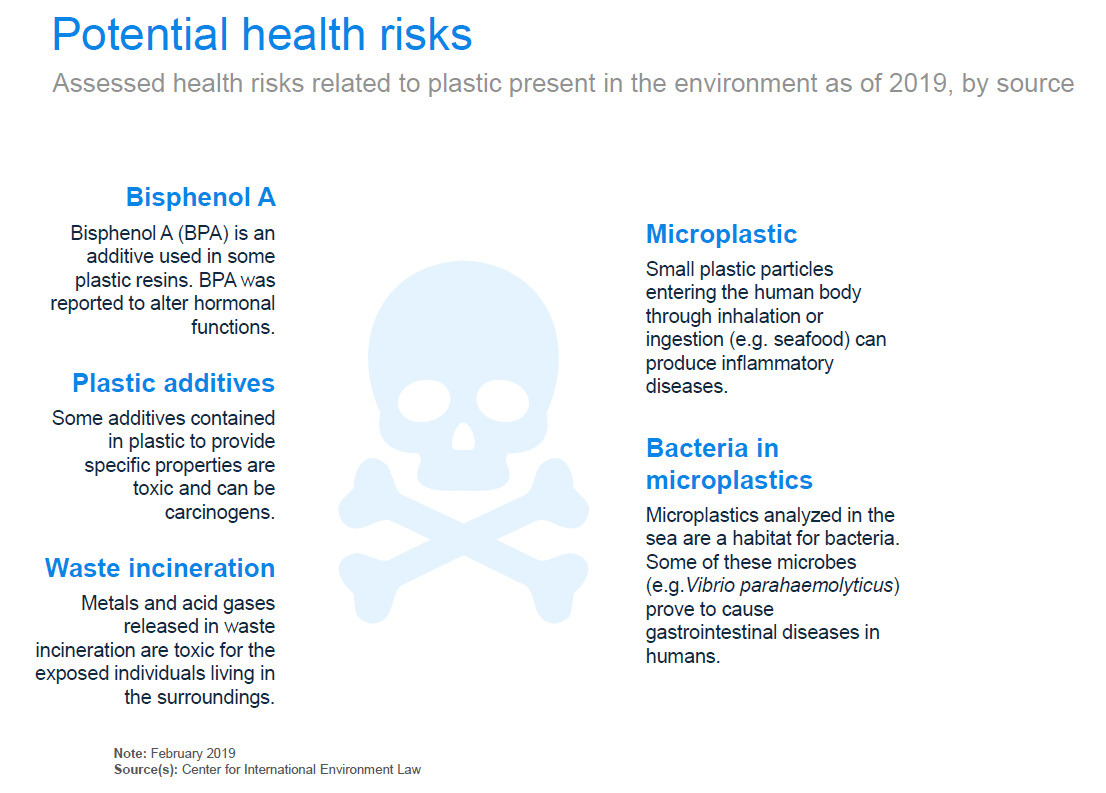 Statistic 1: Plastic and plastic waste treatments in the EU

About Statista
Statista is the global No. 1 business data platform. Statista, founded in 2007 in Germany, has around 700 employees in its offices in Hamburg, London, Milan, Madrid, Copenhagen, New York, Los Angeles, Paris, Singapore and Tokyo. Statista is a leading data and business intelligence portal which conducts international market and consumer studies as well as surveys.