The telecommunication industry in Latin America is worth 81 billion U.S. dollars, with Mexico being the region's second largest market, preceded only by Brazil. The Mexican telecommunications sector is valued at approximately 527 billion pesos, which translates into 26 billion U.S. dollars. Of this amount, the mobile segment accounts for approximately 57 percent, followed by pay TV with 24 percent, and fixed-line services with 19 percent.

In general, mobile services have a significantly higher take-up than fixed-line services. For instance, in Mexico, there are 93 mobile cellular subscriptions per 100 inhabitants as opposed to just 18 fixed phone subscriptions per 100 inhabitants. Nevertheless, both mobile and fixed-line businesses report positive growth rates in the number of subscribers. Be that as it may, people in the country rarely depend on fixed-line services only, as more than half of Mexican households contract solely mobile services, while only 36 percent use both fixed-line and mobile services.
Mobile internet usage is strongly facilitated through the omnipresence of smartphones. In 2021, there were more than 132 million smartphones in use throughout the country. As a consequence, the number of mobile internet users in the North American nation has been on the rise and is expected to exceed 95 million users by 2025.

Telcel is not only a revenue powerhouse, but also the most valuable Mexican telecommunication brand. As a fixed-line phone service and broadband internet provider, Telcel’s revenues are nearly four times higher than AT&T's, the second-ranked company. Telcel and AT&T are joined by Telefonica, which operates under the name of Movistar in Mexico. However, the Madrid-based service provider is not a direct competitor to Telcel and AT&T, as Movistar’s services are mainly focused on mobile phone services. Even so, Telcel remains the leading provider on the mobile market, accounting for a market share of more than 60 percent. It is followed by Movistar with a market share worth 20 percent, while AT&T completes the top three players with a 15 percent share of the Mexican mobile market.
This text provides general information. Statista assumes no liability for the information given being complete or correct. Due to varying update cycles, statistics can display more up-to-date data than referenced in the text.

Telecommunication revenue in Mexico 2021, by segment 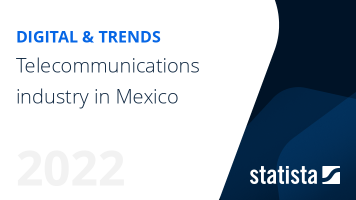 The most important key figures provide you with a compact summary of the topic of "Telecommunications in Mexico" and take you straight to the corresponding statistics.