Vietnam’s fast-growing economy and population have resulted in increasing demand for power and energy in the last decade. The country relies on a diverse energy mix that includes fossil fuel sources such as coal, gas, and petroleum, as well as renewable ones, namely hydropower and solar energy.

Vietnam is rich in energy resources such as coal and gas, and its location is ideal for renewable energy. As a result, coal is the leading source of power, accounting for over 40 percent of the power supply, while hydropower and other renewables were responsible for over a third of the energy mix. Coal production is a key industry within the mining and quarrying sector, supplying increasing amounts of coal each year to meet the burgeoning domestic demand. Although Vietnam was among the top coal producers worldwide, its exports of this commodity have been declining rapidly. Meanwhile, the opposite applies to coal imports.

Hydropower, on the other hand, was instrumental to the economic reforms of Vietnam. This power source was used as early as the 1950s in the country by the French colonists. However, Vietnam only reached its peak in hydropower development in the 1990s after successfully building the Hoa Binh Hydropower Plant with the help of the Soviet Union and Russia. As of 2020, there were more than 370 hydropower plants of various sizes in Vietnam, with a total capacity of over 18 thousand megawatts.

Challenges and outlook of the Vietnamese energy sector

Despite the yearly increase in power capacity generated from key sources, Vietnam still faces the ongoing challenge of power deficiency. According to the government’s estimation, the volume of electricity deficiency will reach 12 billion kilowatt-hours in 2023. While electricity imports have been a temporary solution in recent years, the country is attempting to address this issue with the domestic production of other renewable energy sources apart from hydropower. This includes the further advancement of wind, solar, and biomass energy, whose capacity has been picking up slowly, and geothermal and tidal energy, which are still in the very early stages of development. At the same time, Vietnam has recently decided to scale down major coal power plant projects and closed several small hydropower plants to address the existing risks and environmental consequences of these facilities. In the future, renewable sources are expected to reduce the country’s dependency on coal and other fossil fuels.
This text provides general information. Statista assumes no liability for the information given being complete or correct. Due to varying update cycles, statistics can display more up-to-date data than referenced in the text.
Minh-Ngoc Nguyen
Research Expert covering Vietnam
Get in touch with us now
Published by Minh-Ngoc Nguyen, Oct 17, 2022

YoY growth of demand for electricity in Vietnam 2012-2021

Breakdown of power production and purchase Vietnam 7M 2022, by type of resource 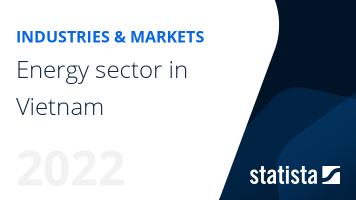 The most important key figures provide you with a compact summary of the topic of "Energy sector in Vietnam" and take you straight to the corresponding statistics.