40k
57k
41k
9.6k
10 years, 9 months and 29 days after winning his 14th and last major title, Tiger Woods rounded off a truly remarkable comeback with his 5th Masters win in Augusta. Sunday’s win was made even more special by the fact that it was the first of Woods’ 15 major championship titles that didn’t see him on top of the leaderboard going into the final round. Woods came back from a 2-shot deficit on Sunday to beat runners-up Dustin Johnson, Xander Schaffele and Brooks Koepka by one shot.

After years of struggling with private problems and career-threatening back injuries that required several surgeries, even Woods and his biggest supporters had started to doubt whether the world’s most popular golfer would ever return to the form that saw him shatter record after record in the late 1990s and early 2000s. But his last straw, a spinal fusion surgery performed in April 2017, finally alleviated the back pain and marked the beginning of an unlikely comeback.

As the pain went, Woods’ game gradually came back, and the results soon followed. Throughout the 2018 season, Woods showed on several occasion that he can compete with the top players again and his win at the Tour Championship in September put an exclamation mark behind his comeback season. Leading up to the Masters Tournament, Woods had posted decent, though not spectacular results so far in 2019, with a shared 5th place at the World Golf Championships-Dell Technologies Match Play in late March. 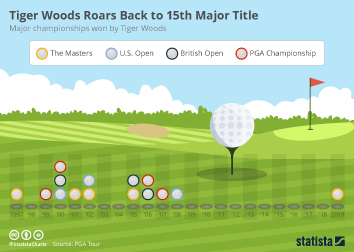