Skip to main content
53k
74.6k
87k
88.9k
China has one of the highest levels of salt consumption in the world. While this is not really a revelation in itself - China's salt 'habit' is already well known - accurate data has always been hard to come by. New research by Tan et al. at the Queen Mary University of London though, has produced an accurate picture of the scale of the problem. The first ever systematic review and meta-analysis of salt consumption estimates in the country yielded an estimated average daily adult consumption of 10.9 grams - more than double the World Health Organization's (WHO) recommended limit of 5 grams.

Consuming large amounts of salt raises blood pressure which leads to an increased risk of cardiovascular disease. In China, this group of conditions accounts for 40% of all deaths. They are not alone in having this problem though. All countries for which there is comparable data (measured by 24-hour urinary sodium excretion) have consumption levels above the WHO's recommended daily limit. As our infographic shows, Montenegro and Portugal join China with averages more than twice the WHO limit. Looking at Western nations, the United States, and Australia are not far behind with a mean of 9 grams, while New Zealand, Canada and England are also above the 8 gram mark.

High salt consumption is often down to habit and a build-up in tolerance to the flavor from a young age. As Tan writes on The Conversation: "...most salt consumed in China comes from the salt added while cooking". There is however an ongoing shift towards processed and restaurant food. In the U.S., this is already the source of 70% of all sodium intake. Looking forward, Tan recommends urgent action in setting maximum targets for the Chinese food industry - to limit the health impacts of this growing trend but also "guide the population in getting used to a less salty taste". 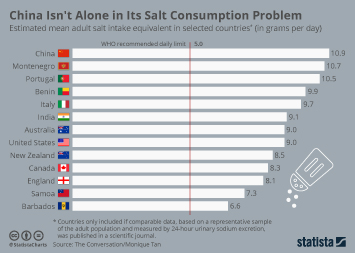