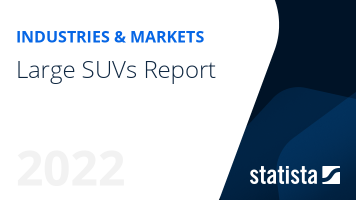 Just like in the Small SUVs segment, the Large SUVs sales share is expected to continue its growth while attracting more premium cars customers. The segments luxury entries, like Mercedes-Benz GLE for example, appeal to buyers looking for vehicles that are more than a means of transport, vehicles that are status symbols.

The Large Sport Utility Vehicle Market segment includes light trucks, used as family vehicles, of an average footprint around 4.65m2 (50 ft2) and an average mass around 2185kg (4815lbs). While designed to be used on rough surfaces, SUVs are often used on city roads and highways.

Background:
Early SUVs originated form commercial repurposing of the military vehicles used around the Second World War, although those initial models were marketed as station wagons for over fifty years, before finally being called sport utility vehicles in the late 1980’s. In the USA, they rose to popularity at the end of the last century with two major factors influencing their increase in sales: firstly, EPA (United States Environmental Protection Agency) classified them as light trucks, changing how they are regulated in respect to fuel efficiency, and, secondly, American manufacturers, influenced by competitive prices of imported, smaller models, focused on a more profitable production of larger cars, driving prices of SUVs further down. After the financial crisis in the late 2000’s, sales of the SUVs slowed down, but the market still continues to grow steadily.