Published by
Erick Burgueño Salas,
Apr 20, 2022
The rail industry comprises of sale, manufacture, and operation of railway technology. Rail transportation, primarily consisting of freight shipments and passenger service, plays a vital role in the economy of many countries.

The world’s railway network spans over 1.3 million route-kilometers worldwide. The United States operates by far the longest railroad network in the world, closely followed by Russia, China, India, Canada, Germany, and France. Japan was adjudged number one in the ranking of countries with the highest-quality infrastructure for railroads in 2019.

The average annual market volume of railway technology in North America is forecasted to reach around 32 billion euros by 2023. Western Europe will be the region with the highest market volume. The collective region of Asia, Oceania, and the Middle East accounts for the largest rail passenger traffic globally, with around three trillion passenger-kilometers traveled annually.

The current leading railway vehicle manufacturer is CRRC Corporation. The company is a state-owned enterprise headquartered in Beijing and formed in June 2015 from the merger of China CNR Corporation and CSR Corporation Limited, the leading rolling stock manufacturers in the world. In the fiscal year of 2019, CRRC generated operating revenue to the value of 17.72 billion U.S. dollars with its railway equipment business line alone.

In response to the intensified competition and efforts to push past the Chinese manufacturer, France’s Alstom and Canada's Bombardier announced to merge both their railway manufacturing units in February 2020. Earlier in February 2019, the European Commission announced that it will not allow Siemens’ planned takeover of Alstom, as it would have significantly reduced competition in the railroad signaling and very-high-speed rail markets. In North America, one of the leading railroad company based on revenue was Union Pacific. In 2019, the company generated over 21.7 billion U.S. dollars in revenue.

In the following 4 chapters, you will quickly find the 32 most important statistics relating to "Rail industry worldwide".

Statistics on the topic
Length of China's rail network
150,000km
Country with the third most effective rail transport services worldwide
Switzerland
Length of railroad network in the U.S.
150,462km 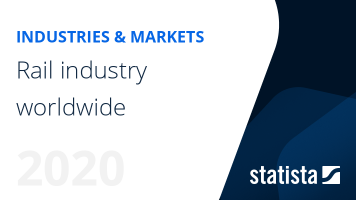 The most important key figures provide you with a compact summary of the topic of "Rail industry worldwide" and take you straight to the corresponding statistics. 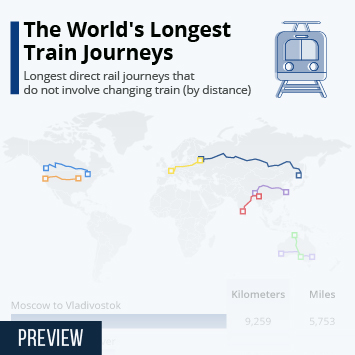 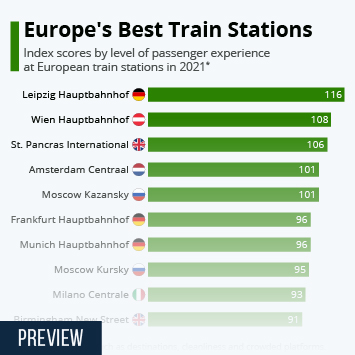