Officially known as the Grand Duchy of Luxembourg, Luxembourg is a country in Western Europe sharing borders with Belgium, Germany, and France. Its capital of the same name is also its largest city by far. As for the country itself, foreign nationals make up almost half of the total population, more than in any other European Union member state. Due to this increasing number of immigrants, it is estimated that the total population of Luxembourg will grow significantly over the next few years. Due to a fusion of Romanic and Germanic influences, Luxembourg is a trilingual nation with three official languages being spoken: Luxembourgish, French, and German.
Politically, Luxembourg has a great influence on world decisions as it is a member of the European Union, NATO, OECD, and the United Nations and is part of the Benelux bloc, also consisting of Belgium and the Netherlands. Economically, Luxembourg has gained strength over the past six years. Gross domestic product (GDP) of Luxembourg is projected to increase by around 20 billion U.S. dollars from 2012 to 2020, while the country’s gross domestic product per capita was the largest in the world as of 2017. The economic sector with the highest share in GDP in Luxembourg is the services sector, accounting for more than 78 percent of GDP.

Luxembourg’s high-income economy features a very low inflation rate, which came dangerously close to deflation after the Eurozone Crisis. Although the unemployment rate in Luxembourg is distinctly below the European Union average, it has been slightly higher in the past years.

Luxembourg has been reporting a trade deficit for the past decade. This is in part due to Luxembourg’s dependence on imports regarding the industry sector, as well as a small agricultural sector that requires significant food imports. All in all, Luxembourg's economy is stable, with a high standard of living for its population.
This text provides general information. Statista assumes no liability for the information given being complete or correct. Due to varying update cycles, statistics can display more up-to-date data than referenced in the text.

Life expectancy at birth in Luxembourg 2020, by gender

Luxembourg in the coronavirus 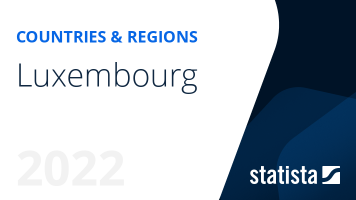 The most important key figures provide you with a compact summary of the topic of "Luxembourg" and take you straight to the corresponding statistics.