France is a western European republic extending from the Mediterranean to the North Sea and the Atlantic Ocean. It also borders Italy, Belgium, Spain, Andorra, Switzerland, and Germany.
France is a member of the European Union and the so-called G7, the leading industrialized countries. Economically speaking, France is doing quite well, with a GDP that is expected to rise continuously over the next few years, a steady unemployment rate estimated to decrease, and a subsequently stable employment rate, as well as a recovering inflation rate. Most of France’s workforce is employed in the service sector, which is not surprising, as France is a popular tourist destination and generates most of its GDP in this sector. However, interestingly, less than five percent of the French workforce work in agriculture despite large areas used as agricultural land. It is also one of the biggest exporters of agricultural products worldwide; its wine and meat are among the most popular products exported to countries like Germany, Spain or the United States.

France’s population figures have also remained steady over the past decade, if anything, the total population of France has been increasing slightly, and life expectancy at birth of the French has risen by one year since 2010. Additionally, the median age has gone up by a spectacular ten years since the seventies. All these facts are sure signs of a high standard of living in France, and even though France’s trade balance has been showing a deficit for the past few years and its national debt makes up more than 115 percent of GDP, the government expenditure is not expected to increase, and spending and revenue are expected to reach a tie by the end of the decade. All in all, despite having some obvious financial deficits to balance out, France does not seem to have been affected by the economic crisis of 2008 as harshly as its neighbor Spain, for example, which is still suffering the consequences and struggling severely.
This text provides general information. Statista assumes no liability for the information given being complete or correct. Due to varying update cycles, statistics can display more up-to-date data than referenced in the text.

France and the coronavirus 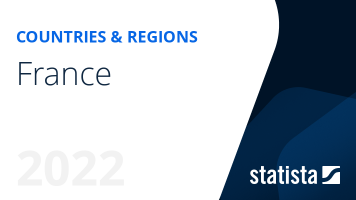 The most important key figures provide you with a compact summary of the topic of "France" and take you straight to the corresponding statistics.