Published by
Erick Burgueño Salas,
Sep 10, 2021
The continued growth in population levels worldwide—coupled with increased economic activity — in light of globalization and modern interconnected economies have led to the accelerated expansion of the air cargo market worldwide. In 2020, due to the COVID-19 pandemic, air freight traffic decreased by 9.1 percent. Nonetheless, the air cargo traffic is expected to recover and reach 63.1 million tons of freight carried through commercial airlines worldwide in 2021. That same year, cargo airlines forecasted revenue will surpass 150 billion U.S. dollars worldwide.

As of 2020, there were almost 850 cargo aircraft in the commercial aircraft fleet of the United States, and in that same year, there was a combined total of over 43.8 billion cargo revenue ton miles generated both in the domestic and international markets in the U.S. The domestic market is mostly dominated by FedEx Corporation and closely followed by United Parcel Services (UPS). FedEx which operates a fleet size of 684 aircraft, alone generated a freight revenue of over 8.2 billion U.S. dollars from June 2020 to May 2021.

South Korea, Japan, and Germany are among the leading destinations for U.S. air freight service exports. In 2020, the United States handled more than 25.1 billion pounds of freight domestically. The most common commodities transported by freight in the U.S. include machinery, electronics, and motorized vehicles. China currently provides by far the highest freight traffic to the United States, while Chile, Colombia, and Vietnam are the fastest-growing lanes. The leading cargo airport in the U.S. based on tonnage is currently Memphis International Airport in Tennessee.

In the following 4 chapters, you will quickly find the 28 most important statistics relating to "Air cargo market in the United States". 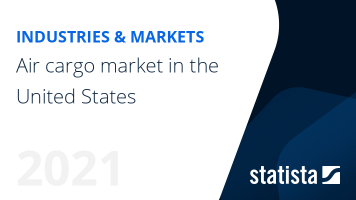 The most important key figures provide you with a compact summary of the topic of "Air cargo market in the United States" and take you straight to the corresponding statistics. 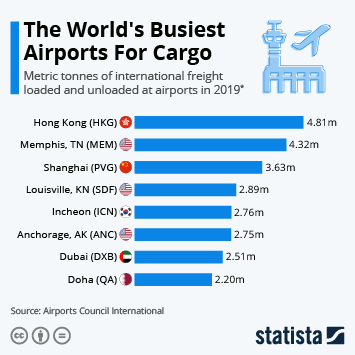