Published by
Aaron O'Neill,
Nov 22, 2021
Algeria, located in Northern Africa, is the tenth-largest country in the world by area, and the largest one in Africa. Compared to its sheer geographical size, Algeria’s total population is quite small in numbers, amounting to roughly 43 million people in 2019, and is estimated to grow by almost more than five million until 2026. The population increase can be attributed to a high degree of urbanization, which has also led to an increase in the average life expectancy. Due to the country’s arid to semi-arid climate, a very large amount of the population live in the northern part of the country, along the Mediterranean Coast. The state’s capital, Algiers, is the most populated city in Algeria, and is located in close proximity to the Mediterranean Sea, thus does not experience the extreme temperatures that are met in the deserts.
From 1830 until Algeria gained its independence in March 1962, the country was under the French ruling. Since then Algeria has become a presidential republic containing 48 provinces. The official languages of the country are Arabic and Berber.

As a result of the fact that Algeria is among the countries with the largest oil and gas reserves, Algeria’s economy has developed rapidly, registering a GDP growth rate of about one percent in 2018 and 2019. After a slight slump in 2014, it is estimated that Algeria’s GDP will rise to up to 175 billion U.S. dollars by 2026. Due to its increasing unemployment rate, Algeria reportes a trade deficit since 2015, a first compared to the ten previous years. A regional power in Africa, Algeria’s national debt in 2019 is estimated to have been around 30.19 percent of GDP, but these figures could be subjected to a revision in the near future, since they are expected to skyrocket.

In the following 6 chapters, you will quickly find the 59 most important statistics relating to "Algeria".

The most important key figures provide you with a compact summary of the topic of "Algeria" and take you straight to the corresponding statistics. 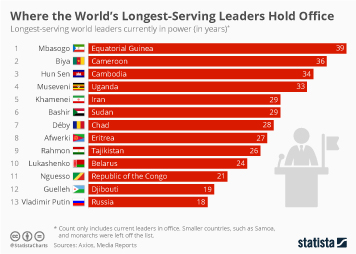