Published by
Aaron O'Neill,
Nov 23, 2022
Morocco is located in North Africa. Its coastline borders on both the Atlantic and Mediterranean Sea, and neighbors include Algeria and Mauritania. The Western Sahara, located to the south of Morocco on the Atlantic coast, remains a disputed territory between Morocco and the Algerian-backed Polisario Front. While Morocco controls and administers a large part of the region, the UN does not recognize this. The Western Sahara is valuable because it is home to some of the world’s largest reserves of phosphate and it is believed that off-shore oil deposits also exist.
Today, Morocco’s population amounts to around 36 million people. The country's capital is Rabat, however, there are five other cities that are significantly larger than Rabat when it comes to the number of residents, the largest city of them being Casablanca. Overall, 63.5 percent of Morocco's inhabitants live in urban areas and cities, since a vast part of the country is comprised of desert and mountains. The fertility rate has remained at around 2.5 children per woman for the last ten years, which is much lower than other countries in Africa and slightly higher than most western European countries. Yet, a large percentage of the population is young, with a little less than 27 percent of the population being under 14 years of age.

Morocco is a close neighbor to Western Europe and it has been able to use its location to its economic advantage. Important trade partners include Spain and France for both exports and imports. Additionally, low labor costs and the country’s market-oriented approach to its economy seem to have a positive effect on its economic growth which, after a drop in 2020, is expected to stabilize over the next few years. Presently, the industrial sector composes close to 30 percent of GDP, yet Morocco maintains a trade deficit , meaning it imports more goods than it exports. GDP per capita is quite low, but higher than Sub-Sahara Africa's. Furthermore, unemployment in Morocco remains relatively high but stable, and poverty and illiteracy continue to be a problem. Because of this, inhabitants often migrate to other Arab nations or to Europe, and increasing numbers of Moroccans have been found amongst migrants and refugees reaching Europe.

While there were some concerns over the country’s first Islamist party which was elected in 2011, the party has maintained its multi-party democracy and keeps religion and politics largely separate - serving as an example of Islamic democracy. Morocco is also looking to overcome its dependence on foreign oil and gas by deploying renewable energy technologies around the country – notably solar technology to harness the solar capacity of the Sahara Desert region.

In the following 5 chapters, you will quickly find the 45 most important statistics relating to "Morocco". 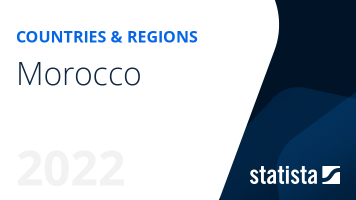 The most important key figures provide you with a compact summary of the topic of "Morocco" and take you straight to the corresponding statistics. 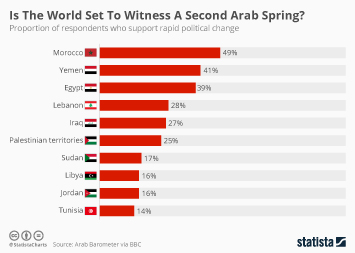