Online dating websites and apps in the Netherlands - Statistics & Facts

There were approximately three million single-person households in 2017 in the Netherlands, the highest number reached since 2000. Between 2015 and 2016, total expenses on dating decreased by approximately 11 percent to 684 million euros. This is due to both the decreasing number of people who are actively dating as well as people being less willing to spend much money during a date. Of all couples in the Netherlands, approximately 14 percent met each other through the internet in 2017. This is not only the case for young people. People over 40 years increasingly find a new relationship online. 15 percent of Dutch respondents aged 50 to 59 years old, for example, indicated they did so.
Roughly 17 percent of Dutch internet users said they visited an online dating website, service or app in the second quarter of 2017. Users aged 16 to 24 did this the most, with approximately 22 percent. Based on the number of visitors per month, Lexa.nl was the most popular online dating website in the Netherlands, with 426,000 visitors as of January 2017. According to the results of a 2017 survey, the leading reason why singles would use a dating website was "to search for a serious relationship", as opposed to searching for "a nice date" or "social contact".

As of 2017, Tinder is the most popular dating app with a penetration rate of 61 percent among Dutch singles. Badoo, the number two dating app of the Netherlands in 2017, was significantly less popular with roughly 18 percent indicating they use it. When asked during a 2017-survey which dating app singles would consider using if they were to date online, roughly one quarter answered they would consider using Tinder. This was especially the case among people under 30. Domestic app Pepper would be considered by approximately 13 percent of participants, especially among 30 to 39-year-olds. Tinder, however, was popular with both men and women, as both genders indicated they used the dating app.
This text provides general information. Statista assumes no liability for the information given being complete or correct. Due to varying update cycles, statistics can display more up-to-date data than referenced in the text.
Published by S. Dixon, Feb 8, 2022

Leading iPhone social media apps in the U.S. 2022, by revenue

Leading iPhone social media apps in the U.S. 2022, by revenue

Leading Android social media apps in the Netherlands 2022, by downloads 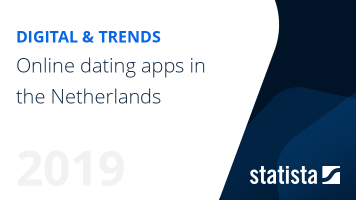 Go to report Online dating in the Netherlands
Top Seller

The most important key figures provide you with a compact summary of the topic of "Online dating in the Netherlands" and take you straight to the corresponding statistics.

Online dating platforms in the Netherlands

Dating market in the Netherlands