Published by Salma Saleh, Apr 29, 2022
The countries of the Gulf Cooperation Council region are considered some of the most water stressed locations in the world. In 2014, Kuwait had the highest water dependency rate in the world as it depends on importing 100 percent of its water from neighboring countries.

Previously, most Gulf Cooperation Council countries charged their citizens a small, subsidized rate for water utilities. This however is gradually changing, as the governments in the region as well as citizens are becoming more and more aware of the water crisis affecting their countries. The designed capacity of wastewater treatments plants has been on the rise to encourage the recycling and reuse of treated sewage water. Oman announced a plan to phase out water and electricity subsidies until 2025. On the other hand, the aging and inefficient water infrastructure in Saudi Arabia contributes to the country's comparatively high-water inefficiencies such as the loss of water during transport. Saudi administration has adopted proactive measures to reduce nationwide water consumption and encourage conservation of water. In large cities, projects are continuing to replace outdated water distribution systems as well as enhance drainage and wastewater networks. Access to water is in general a global concern, as the future the demand for fresh water will increase for municipal and domestic usage, as well as for industry and agricultural use.

In the following 5 chapters, you will quickly find the 21 most important statistics relating to "Water management in the GCC". 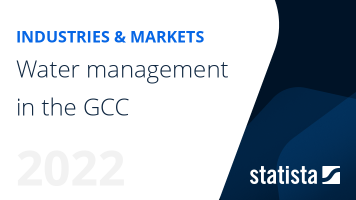 The most important key figures provide you with a compact summary of the topic of "Water management in the GCC" and take you straight to the corresponding statistics.