Nissan in the UK - Statistics & Facts

Published by
Mathilde Carlier,
Apr 19, 2022
The Japanese automobile manufacturer Nissan had held assets worth 18.7 trillion Japanese yen in their 2017 financial year, which amounted to some 176 billion U.S. dollars. The company’s assets have been continuously rising since 2009. However, operating profits generated by Nissan had declined that same year, being roughly 170 billion yen lower than the previous year. The largest share of employees were located in the company’s home market, with a further 16,807 people employed across Europe.
As for the United Kingdom market, Nissan had sold 85,200 cars between January and September 2018. In these months, the manufacturers market share averaged 4.11 percent, with a peak of 5.18 percent recorded in March. As of January 2019, the company made up 4.33 percent of the UK car market.

Through their Sunderland plant, Nissan had produced 495,206 passenger cars in 2017. Jaguar Land Rover was the only other automobile manufacturer which had made more passenger cars that year. Despite only ranking second in production by brand, the Nissan Qashqai had been the leading car model manufactured in the UK for the past three years. The model also proved popular with consumers and was the fourth most sold car in the UK in 2018 at 50,546 units.

As of the third quarter of 2018 there were more than 468,000 Nissan Qashqai cars registered in Great Britain. By comparison, registration figures for the Nissan Leaf model numbered 23,260 units.

In the following 4 chapters, you will quickly find the 20 most important statistics relating to "Nissan in the UK".

The most important key figures provide you with a compact summary of the topic of "Nissan in the UK" and take you straight to the corresponding statistics. 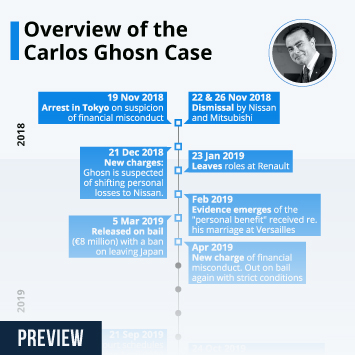