Compared to natural diamonds, lab-grown diamonds are in general less expensive. As of 2020, the retail price of lab-grown diamonds produced by major diamond producer De Beers was 800 U.S. dollars per carat through its jewelry subsidiary Lightbox. In addition to being less expensive, lab-grown diamonds are considered by many to be a more environmentally and socially ethical alternative to natural diamonds. This is due to lab grown diamonds being made in a lab rather than requiring large amounts of earth to be moved and involving potentially problematic labor practices along the value chain. Some consumers consider this to be another appealing attribute of lab-grown diamonds.
This text provides general information. Statista assumes no liability for the information given being complete or correct. Due to varying update cycles, statistics can display more up-to-date data than referenced in the text. 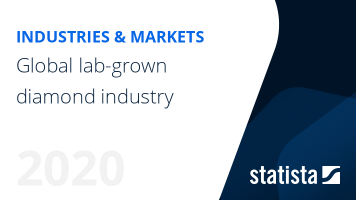 The most important key figures provide you with a compact summary of the topic of "Lab-grown diamond industry" and take you straight to the corresponding statistics.