Published by
Eloise Trenda,
Jan 24, 2022
Agriculture is one of the most ancient livelihoods, and it still plays a significant role in some parts of the world. In the past, Spain was an agrarian country until the second half of the 20th century, when agriculture was the predominant source of the country's economy. However, agricultural mechanization reduced employment significantly and caused rural depopulation. As people moved to cities, other sectors, such as the services industry, hugely developed.
As a result, agriculture stopped being the principal economic activity in the country and nowadays and in 2019 it only represented 2.65% of Spanish Gross Domestic Product (GDP). Despite this, the long agricultural tradition continues to be notable in Spanish rural society and some economic activities such as foreign trade.

In 2019, the agricultural production value in Spain exceeded 50 billion euros, with flagship products such as wine or olive oil, among others. As a matter of fact, grapevine was the type of crop with the highest production agrarian volume with more than 39 million tons, followed by cereals.

Although cereal crops had the second-highest production volume in 2019, they are also the most imported agricultural product by Spain. On the other hand, exports were led by the fruits and vegetables, that have European countries such as France or Germany as the main destinations. Moreover, the foreign trade in the agricultural sector generates a surplus of over 17.5 billion euros in Spain.

Andalusia ranked as the region with the largest cropland area with 3.6 million hectares in 2019. Castille-La Mancha and Castille and Leon followed second and third, respectively. Andalusia also leads the Spanish agricultural production value, far ahead of the other autonomous communities. In addition, the southern region also heads the production and area of organic farming, in which Spain is the leading European country.

In the following 6 chapters, you will quickly find the 38 most important statistics relating to "Agriculture sector in Spain". 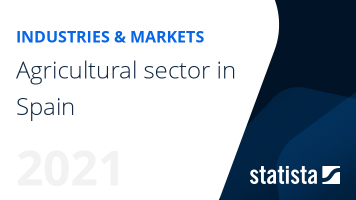 The most important key figures provide you with a compact summary of the topic of "Agriculture sector in Spain" and take you straight to the corresponding statistics.