Published by
Thomas Alsop,
Jan 11, 2023
Quantum technology works by using the principles of quantum mechanics – the physics of sub-atomic particles – notably quantum entanglement and quantum superposition. Challenging though it may sound, it is not a prerequisite to fully understand quantum in its entirety to benefit from the technology. Essentially, quantum technology has the potential to offer solutions that are faster, more complex, more secure, and more precise than traditional technologies. Sectors exploring quantum technology include telecommunications, aerospace, automotive, life sciences, energy and chemicals, and banking.

The three broader quantum technology segments include quantum computing, quantum communications and security, and quantum sensing. Quantum computing leverages the properties of quantum physics and engineering to perform incredibly advanced calculations and data simulations. Quantum communications involves the protection and transmission of data securely and effectively, making it effectively hacker-proof. Quantum sensing is an advanced sensor technology that detects changes in motion, and electric and magnetic fields, by collecting data at the atomic level, improving accuracy and precision.

A variety of funding streams have recognized the potential of quantum technology, with venture capital firms as well as public bodies investing in the field. China and the European Union lead the way in terms of public funding for quantum technology. As a result, it comes as no surprise that China, the Netherlands, and Germany are among the leading countries in terms of quantum adoption, as is the United Kingdom too. Organizations have expressed the greatest interest in building quantum applications for AI, data analytics, simulation, and optimization tasks. Notable quantum uses include rapid drug and vaccine discovery in days instead of years, improved supply chain management through enhanced algorithms, and greater optimization in oil and gas exploration, production, and refinement.

In the following 6 chapters, you will quickly find the 31 most important statistics relating to "Quantum computing". 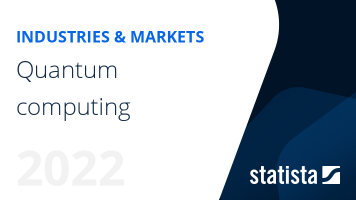 The most important key figures provide you with a compact summary of the topic of "Quantum computing" and take you straight to the corresponding statistics.