40k
57k
41k
9.6k
Worldwide, seven out of ten respondents worry that fake news or false information could be used as a weapon. Also, 59 percent say that it is getting harder to tell if a piece of news was produced by a respected media organization.

Overall, media has been steadily losing user trust, however, according to a Goldman report, journalism (i.e. traditional media and online-only media) is regaining some trust in comparison with platforms, understood as search engines and social media (such as Google, YouTube, Yahoo, Facebook, Twitter, et al.) Trust in journalism jumped five points year-over-year while trust in platforms dipped two points.

However, one major problem is that the boundaries between these forms of media are blurring. “Some people consider platforms to be part of ‘the media’ — including social media (48 percent) and search engines (25 percent) — alongside journalism (89 percent), which includes publishers and news organizations.” Most likely, the drop in trust in social and search, and of the credibility of peer communication, are contributing to the overall decline of trust in media, according to Edelman.

This chart was first published by our media partner FIPP. 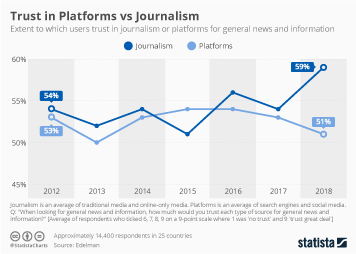 Return to Normal after COVID-19