Published by
Amy Watson,
Jun 21, 2022
Fake news is an insidious and widespread issue in the news industry as a whole and has become a global problem. In the United States, the term and concept grew in popularity during the 2016 election, but has since manifested itself in areas outside the realm of politics. A recent example of this is the COVID-19 pandemic – almost 80 percent of consumers in the United States reported having seen fake news on the coronavirus outbreak, highlighting the extent of the issue and the reach fake news can achieve.

The public’s confidence in their ability to recognize fake news is thankfully on the increase. This is an important step given that fake or inaccurate stories can quickly gain traction, and sometimes distort audiences’ perceptions and knowledge of subjects ranging all the way from public health to presidential elections. When asked about the impact of fake news*, many consumers said that they check facts more thoroughly themselves, over 10 percent stopped getting news from certain outlets, and approximately 15 percent said fake news had led to them reducing the amount of news they consume overall. https://www.statista.com/statistics/1306407/fake-news-impact-us/

The spread of false information is hard to control and audiences seem aware of this, with most expecting the fake news situation to worsen in the next five years. What many consumers may not realize however is that they also have a part to play in reigning in or slowing the spread of made-up stories. Fake news sharing is not uncommon and whilst savvy news audiences refrain from deliberately passing on content they know to be false, identifying what is legitimate and what is not can be a challenge. In fact, close to 40 percent of respondents to a study admitted to having accidentally shared fake news to others.

As audiences grow more discerning and learn to swiftly differentiate between suspicious and genuine content, there is hope that whilst fake news will continue to circulate (sadly an inevitability in today’s digitized world) consumers will gradually pay it less attention. Moreover, some analysts and consumers favor a combined approach from governments, official news publications, journalists, social media networks, and influential companies which seeks to identify and eliminate fake news from the news landscape. Whilst a good idea in principle, the reality of such an approach would almost certainly spark concerns about press freedom, something which is already worsening on a global scale. In the meantime, fake news will continue to be a problem, and reporting, avoiding, or identifying it will fall mostly to the consumer.

In the following 3 chapters, you will quickly find the 18 most important statistics relating to "Fake news in the U.S.". 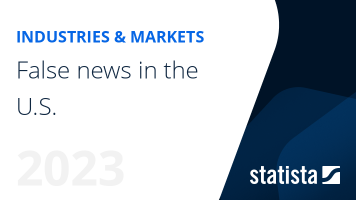 Go to report Fake news in the U.S.
Top Seller

The most important key figures provide you with a compact summary of the topic of "Fake news in the U.S." and take you straight to the corresponding statistics.

News in the United States 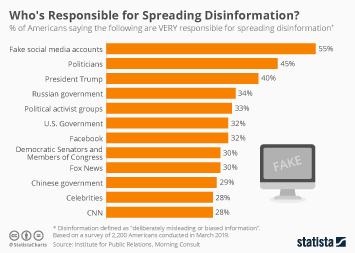 Who's Responsible for Spreading Disinformation? 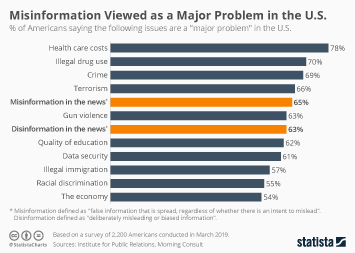 Misinformation Viewed as a Major Problem in the U.S.