88.9k
After a motorway bridge collapsed in Genoa on Tuesday killing 35 people, Italy is still in shock and mourning. While rescuers searched the rubble and twisted steel for survivors, investigators were already examining possible reasons for such a catastrophic collapse. The country's transport minister called on senior managers at the company managing the bridge to resign while a criminal inquiry into the disaster has also been announced.

The Morandi bridge was built in 1967 and measures 1.2km long. Generally, bridges like that are designed to stand for at least 100 years with periodic maintenance work required. Work was being carried out at the time of the disaster, though it isn't yet clear if that had any role in what happened. There have also been suggestions that a design flaw could have been responsible, particularly due to erroneous calculations about how concrete ages.

Concern has also been raised about the increasing volume of traffic on the A10 motorway and whether that caused faster than expected degradation of the structure. What is certainly indisputable, however, is that Italy's investment in its road network has declined alarmingly. OECD data published by the BBC shows that while Germany, France and the UK have all poured money into their roads in recent years, Italian investment fell from €13.66 billion in 2007 to just €3.39 billion in 2010. The figure only climbed to just over €5 billion by 2015, far behind Germany (€11.69 billion), France (€10.01 billion) and the UK (€9.07 billion). 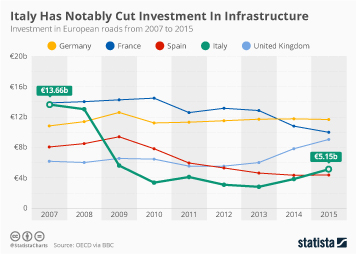 This chart shows investment in European roads from 2007 to 2015.