On Saturday, Pope Francis put Robert Schuman on the path to sainthood. His work was instrumental laying the groundwork for the creation of the modern European institutions and the Vatican has now recognised the "heroic virtues" of the French statesman in preventing another war on the continent. There is one final step on the road to beatification, however, and that is the small matter of the church attributing a miracle to him.

That might not be as difficult as it seems given the amount of conflict and violence Europe found itself embroiled in up to the mid 20th century, a level of death and destruction that has fallen dramatically thanks to unifying figures like Schuman. Whether the disappearance of violent European wars is a miracle in itself has proven controversial, particularly when the matter was raised when the UK voted to leave the EU.

Before and after Brexit, Remain voters in the UK frequently made the point that lasting peace in Europe needs to be considered one of the primary achievements of the EU. How valid is that claim? In order to find out, we analyzed Peter Brecke's Conflict Catalog which documents violent deaths in 3,708 conflicts going all the way back to 1400. The result is the following infographic which estimates the number of violent deaths in wars in Europe between 1800 and 2016.

Back in the 1800s, continental Europe was ravaged by conflict after conflict. Between 1803 and 1815 alone, well over six million people lost their lives in the Napoleonic wars while the Hungarian Revolt and Franco Prussian war saw the deaths of hundreds of thousands more. The first half of the 20th century was of course the bloodiest period in the continent's history and according to Project InPosterum (rather than Peter Brecke's global analysis of World War II deaths), 32,156,000 people died in WWII in Europe.

Soon after the conflict ended, the Greek Civil War erupted in 1946, costing another 158,000 lives. Things suddenly started to improve when the European Economic Community was founded in 1957. For example, Europe only experienced 18,409 violent war deaths between 1961 and 1992. The European Union was established in 1993 and conflicts continued to be rare events. Violent deaths still occurred during the breakup of Yugoslavia, the Russo-Georgian War, the conflict in Donbass and elsewhere.

However, those deaths certainly were not on a scale matching the extensive bloodshed of the 1800s and first half of the 20th century. That certainly backs up the argument that the European Union and figures like Robert Schuman in particular, have played a major role in uniting and keeping the continent largely peaceful since since the middle of the 20th century. Is the change in Europe's fortunes a miracle? Well, that is a matter for the pope to decide. 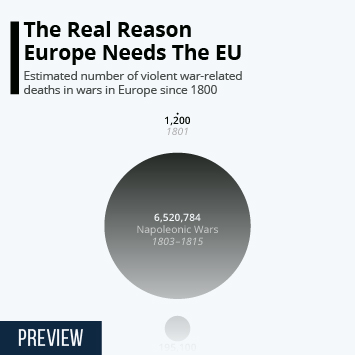 This chart shows the estimated number of violent war-related deaths in Europe since 1800.