88.9k
A major study published by the Lancet last week found that the use of caesarean sections is increasing rapidly around the world with experts labeling the pace of growth "alarming". At the turn of the century, 12 percent of global births were via C-section and by 2015, that had increased to 21 percent. Doctors have said that in many cases, the procedures were not justified. That point of view is echoed by the World Health Organization who estimate that 10 to 15 percent of all births require the procedure due to complications and that a rate higher than that is excessive.

The surgery can of course prove life-saving more mother and infant but it does come with risks and can result in complications, particularly when it comes to future births. In give countries more than half of all births are by C-section and the following infographic provides an overview of where rates are highest. With a C-section rate of 58.1 percent, the Dominican Republic is in first place followed by Brazil and Egypt with 55.5 percent each. Even though the rate is far lower than that in the United States, it is still a relatively high 32.9 percent.

The research made the point that C-sections are overused in rich countries while it is not available in many poorer parts of the world, even though it is genuinely necessary in some cases. Its use was up to 10 times more frequent in the Caribbean and central Africa in 2015. For example, in South Sudan, it was barely used, accounting for just 0.6 percent of all births. The general rise in the procedure's popularity has been attributed to more owomen giving birth in medical institutions like hospitals. Other reasons it is becoming more common is due to women's fear of pain during childbirth, concerns about future sex-life and the perception that it is safe. 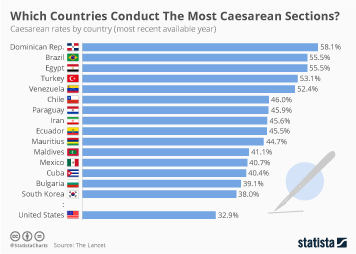