Published by Statista Research Department, Aug 13, 2021
A pregnancy is defined as the time between conception and birth and usually lasts 40 weeks. Nationwide pregnancy numbers and rates are difficult to survey because they also include abortions and miscarriages as pregnancy outcomes. However, in 2019 the number of live births in the United States was around 3.75 million. The birth rate in the United States has been steadily decreasing over the past few decades as younger people now have fewer children than the previous generations and some decide not to have children at all. Some of the leading reasons for having difficulty getting pregnant among those who had difficulty conceiving include polycystic ovary syndrome (PCOS) (female factor), low sperm production (male factor), and endometriosis (female factor).

In more developed countries, teenage pregnancies are often put in special focus. This is because of possible socioeconomic, educational, but also medical consequences. In the United States, the pregnancy rate among 15-19 year-olds has drastically decreased by over half since 1990. The U.S. states with the highest teenage pregnancy rates include Arkansas, Mississippi, and New Mexico. Education and the use of contraception remain the most effective ways to prevent pregnancy among sexually active teens. It is estimated that publicly funded family planning clinics in the United States helped avert over 500,000 unintended adolescent pregnancies in 2016, alone. However, access to contraception and open and honest discussion and education about sex remain issues in many parts of the United States.

A women's health during pregnancy is vital to the health of an unborn baby. Certain foods, alcohol, and tobacco can have long term, permanent negative impacts on a child's development during pregnancy. Despite such knowledge being widespread in the U.S., a surprising share of women still smoked cigarettes while they were pregnant. Similarly, although the dangers of alcohol use to unborn babies is well known, a survey found that an average of almost 10 percent of pregnant females aged 18 to 25 drank alcohol in the past month from 2015 to 2018. Some common pre-existing chronic physical and behavioral conditions prior to pregnancy include obesity, anxiety, hypertension, and type 2 diabetes.

Despite advances in medicine and technology, maternal mortality remains a problem in the United States, with the U.S. reporting one of the highest maternal mortality rates among all developed countries worldwide. Around 38 percent of pregnancy-related deaths in the U.S. occur during pregnancy with the leading causes of such deaths including hemorrhage, cardiovascular and coronary conditions, cardiomyopathy, and infection. Sadly, pregnancy-associated deaths are much more common among minorities and a majority of deaths are preventable.

In the following 7 chapters, you will quickly find the 37 most important statistics relating to "Pregnancy".

Statistics on the topic
Percentage of women in the U.S. who wished they knew more about the stages of pregnancy
29%
Number of pregnancies among those aged 18-19 years in 2017
235,810
Percentage of U.S. pregnant women who were overweight or obese during pregnancy
57.2%

The most important key figures provide you with a compact summary of the topic of "Pregnancy" and take you straight to the corresponding statistics.

Births in the U.S.

Women's health in the U.S. 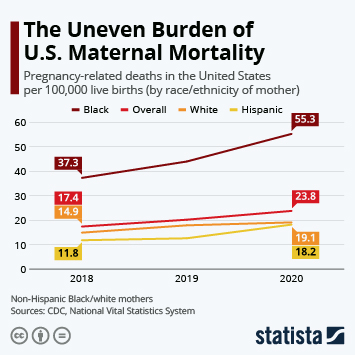 pregnancy-related deaths in the United States per 100,000 live births 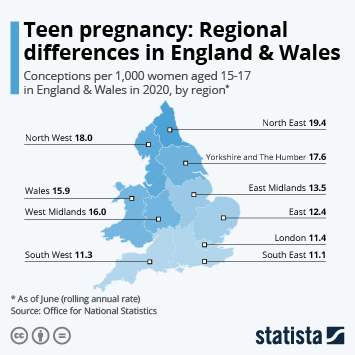 The highest rates of teen pregnancy in England & Wales