88.9k
On Tuesday, President Trump released a statement defending U.S. ties with Saudi Arabia amid continuing international uproar about the murder of journalist Jamal Khashoggi. That's despite U.S. intelligence concluding that Crown Prince Mohammed bin Salman was involved in the murder. Trump's refusal to hold the Saudis accountable is sending a startling message about just how far the U.S. president is prepared to take his "America First" policy.

As well as turning a blind eye to the events in Istanbul, Trump praised the Saudis for making a $450 billion investment in the U.S. economy, though this figure was refuted by the Washington Post and New York Times. The U.S. has been supplying billions of dollars worth of hi-tech weaponry to the Saudis for years and the hardware has been used to push 8 million people in Yemen to the brink of starvation without much scrutiny.

That is beginning to change as the critical humanitarian situation in Yemen becomes impossible to ignore. Even though the U.S. recently announced it would stop refueling Saudi warplanes, large numbers of civilians are being killed by U.S. munitions dropped by U.S. and British-made aircraft. Two thirds of Saudi Arabia's 365 combat-capable aircraft are of U.S. origin including 171 F-15s. The question being asked increasingly frequently is whether a small number of U.S. jobs should take precedence over holding the de facto Saudi ruler accountable for Khashoggi's murder and the situation in Yemen.

It cannot be argued that U.S. military technology has formed the pillar of the Saudi onslaught in Yemen and the following infographic shows the value of potential arms deals with Riyadh notified to Congress by year (not all deals resulted in final sales) as reported by the Center for International Policy. House Democrats may use their new majority to probe Trump's relationship with the Saudis and several bills could halt the arms flow. As the situation in Yemen deteriorates and Saudi Arabia's international standing plummets, itt will be interesting to see whether Trump will be forced to put his "America First" policy to one side and show the world that U.S. stands for more than just a dollar sign. 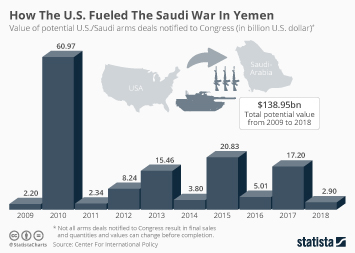 This chart shows the value of potential U.S./Saudi arms deals notified to Congress.