40k
57k
41k
9.6k
The Brexit negotiations have been far from plain sailing but, with an agreement with the EU very close, most of the sticking points seem to have been resolved (at least to the satisfaction of the negotiating teams). Now though, a new rock in the road threatens to throw Brexit off course. Spain, unhappy with the lack of a provision guaranteeing its involvement in any post-Brexit agreements between the UK and EU affecting Gibraltar, has said it will vote against the agreement should this not be included in the final draft. Although an absolute majority is not strictly required, the EU is keen to come through the process avoiding any damage to the unity of the remaining 27 member states.

Gibraltar is a British overseas territory, accounting for just 6.8 square kilometres and home to 33 thousand people. Located on Spain's south coast, and belonging to Britain since 1713, the peninsula is, despite its small size, of great strategic value to the UK. Speaking at the signing ceremony for the Armed Forces (Gibraltar) Act early this month, Armed Forces Minister Mark Lancaster said: "Gibraltar is of vital importance to the UK Armed Forces and our allies. Whilst our relationship with the EU is changing, our commitment to European prosperity and security remains steadfast and our duty to support Gibraltar, its people and its economy is resolute." 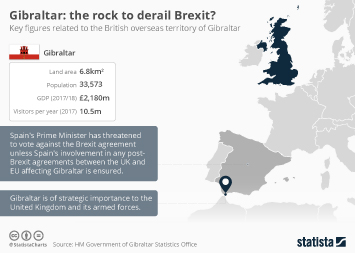 This chart presents key figures related to the British overseas territory of Gibraltar.