88.9k
Chinese tourism in the United States has boomed over the past two decades, grossing over a $30 billion trade surplus for the U.S. this year alone. Despite this, Chinese tourism spending has been significantly slower over the past two years, due in part to the ongoing trade war, downturns in the Chinese economy, and reduced international travel to the U.S. overall.

The trade war has spurred ill will between the two largest economies in the world, tinting travel with a nationalist lens. China issued a travel warning for the U.S., telling its citizens to beware of various crimes and high medical costs. In a familiar back-and-forth, the U.S. released its own travel warning about citizens visiting China. Both are diplomatic measures to reduce tourism.

Exasperated by the trade war and in part because of it, China is experiencing a bout of economic uncertainty. Many analysts believe that this domestic economic turbulence is contributing to the downturn in growth for Chinese tourism in the U.S. According to the Chinese Outbound Tourism Research Institute, with harder times, more Chinese tourists are staying closer to home.

The U.S. Department of Commerce estimates that in 2018 the United States' trade balance with China was about ten times the size of the trade balance in 2010. While Chinese tourism to the U.S. has grown and in absolute terms is much higher than it once was, the growth is slowing significantly. Between 2009 and 2010, the U.S. travel and tourism balance grew by 80 percent. Over the last year, the travel and tourism balance grew by only three percent. International tourism to the U.S. has dropped overall by about two percent over that same time frame.

Chinese tourism has become a huge part of the American hospitality industry. Back in 2000, about a quarter of a million Chinese tourists visited the U.S. Within ten years, that number rose to nearly a million tourists, becoming one of the top five international countries for U.S. bound tourists. Higher incomes, more accessible flights, and less restrictive visas all helped to grow the Chinese tourism market in the U.S. 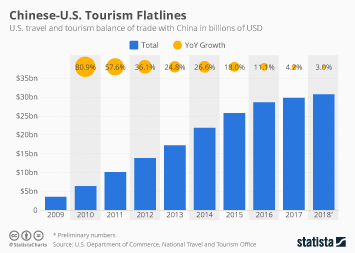 This chart shows the U.S. travel and tourism balance of trade with China in billions of USD.