Skip to main content
53k
74.6k
87k
88.9k
During a press conference with Polish President Andrzej Duda, President Trump announced that 1,000 more American troops would be deployed to Poland. Even though the soldiers and hardware are only going to make the short hop across the border from the 52,000-strong U.S. presence in Germany, major American military deployments generally require tremendous amounts of energy and leave a large carbon footprint. A new report from Brown University has now estimated that since the U.S. invasion of Afghanistan in 2001, total greenhouse gas emissions from the U.S. military have amounted to 1,212 million metric tons. In 2017, the amount of CO2 generated came to 59 million tons, a figure that's higher than many industrialized nations.

Sweden only generated 48 million tons by comparison in 2017, according to BP's Statistical Review of World Energy which records carbon dioxide emissions in different countries. The U.S. military also has a larger annual carbon footprint than Morocco, Peru, Hungary, Finland, New Zealand and Norway. The research states that if the Pentagon was a nation, it would be the world's 55th largest CO2 emitter.

War and preparation for it are highly fossil fuel intensive and along with being the single largest energy consumer in the U.S., the Department of Defense is also the world's single largest institutional petroleum consumer. When it comes to how that energy is consumed, 70 percent is used by moving and burning jet fuel and diesel. It doesn't help that military equipment is not known for being fuel efficient and it's thought that the 60,000 humvees remaining in the U.S. inventory only manage four to eight miles per gallon of diesel. Military real estate also has serious energy requirements and in FY2017, the Department of Defense spent $3.5 billion heating, cooling and providing power for 560,000 buildings at 500 different military installations. 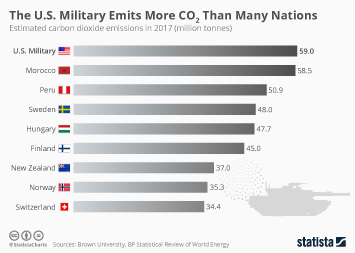