German city Frankfurt was found to have the highest risk of a housing bubble developing in a recent survey released by investment bank UBS. Other cities at a high risk were Toronto, Hong Kong, Munich, Zurich and Vancouver.

In Frankfurt, housing prices grew by an annual 10 percent over the course of the last five years. Lowest-ranked Dubai, however, entered "undervalued" territory as prices fell over the past five years following a housing boomed between 2010 and 2014 in connection to high oil prices.

After the unrest in Hong Kong, bubble risk increased once more in the notoriously pricey city. White collar workers exploring the flexibility of work from home during the coronavirus pandemic caused a (probably temporary) easing of the situation in New York City (rank 18) and San Francisco (rank 14). 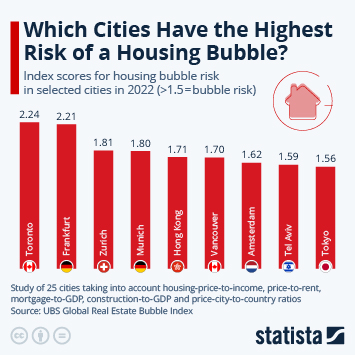