Concerns about a less-than-smooth transfer of power in the event of a Democratic win in the U.S. presidential election in November have been quelling for a while now. Incumbent President Donald Trump has infrequently poured oil onto the fire, most recently at a press conference Wednesday night when he said that the public would have to “see what happens” with regard to a possible transfer of power after the election and suggested to “get rid of the ballots”, in which event there would be no transfer, but a continuation.

There is no precedent and also no law governing what would happen in the event that a president would refuse to leave office after having lost an election, but there is the potential of federal law enforcement, the D.C. Police or the National Guard playing a role if things do get dicey in November.

A look at who controls these agencies casts a light on the imbalances of power in the U.S. political system, which relegated a lot of authority to the president. All the most powerful federal law enforcement agencies in the U.S., among them the FBI, the CIA and the U.S. Marshals are controlled by the executive branch. While this is not necessarily uncommon in countries around the world, the U.S. presidential system combines the powers of a head of state and a head of government in one person, the president. In a parliamentary system, the head of government and leader of the executive branch would be second (or even third) in command to a different head of state (for example a ceremonial president or monarch), who can check the head of government’s power. In a semi-presidential system like France, the president does not control the executive branch directly but through a prime minister appointed by him, again distributing power between several people.

Furthermore, the U.S. President has “commander-in-chief”-like powers also pertaining to the country’s interior, like emergency powers to take over the D.C. Police and the power to activate the National Guard, a military reserve component, for federal use and lead them together with the secretary of defense.

In contrast, the two other branches of the U.S. government only control a few small federal law enforcement agencies each, all of which have limited power. Congress also has two more single officials, the Sergeant at Arms of the House of Representatives and the Sergeant at Arms of the Senate, both of which can arrest and detain people, but only in matters pertaining to the respective chambers of Congress. The same applies to the Capitol Police (which is around 2,000 officers strong), the Government Publishing Office Police (around 50 officers) and Inspector General’s Office and the Library of Congress Inspector General’s Office. The U.S. Supreme Court also has a Marshal and Police Force that is around 120 officers strong, while the federal courts system’s probation officers are dealing exclusively with released prisoners, pretrial defendants and those sentenced to probation. 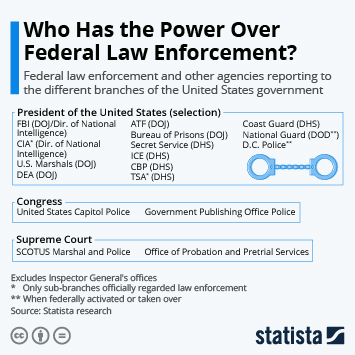 This chart shows which branch of the U.S. government has the power over federal law agencies and some other entities