The U.S. has one of the highest maternal mortality rates in the world relative to other wealthy, developed countries. At 17.4 maternal deaths for every 100,000 live births, they beat out other countries like France, Canada and the U.K. by over 100 percent. The U.S. is abysmally higher than in Germany, Norway and the Netherlands, where the mortality rates stands at 3.2 or lower per 100,000 live births. New data shows maternal mortality in the U.S. may be linked to their low number of midwives.

Despite the U.S. spending enormous amounts of money on maternity care, the high maternal death rate and lack of midwives is a question many still struggle to answer. According to Scientific American, cesarean sections are roughly 32 percent of all births in the country, much higher than the World Health Organization’s recommended 10 percent. Many rural areas simply lack the human resources for traditional midwife care, instead relying on doctors to manage the bulk of modern childbirth. State laws and policies surrounding midwifery as legal practitioners also varies, and education about the profession is scarce throughout communities. 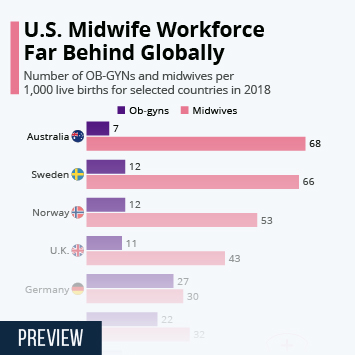 This chart shows the number of OB-GYN doctors and midwives per 1,000 live births for selected countries in 2018.