According to numbers published by the OECD, support for agriculture producers and consumer differs significantly between countries. In its 2020 Agricultural Policy Monitoring report, the organization notes that India was among the countries that was actually taking money out of the pockets of its farmers by setting low prices for some commodities.

The OECD estimated losses to farmers at $23 billion in 2019 after deducting any financial support payments or discounts that producers also receive. Fierce protests about opening up the system of minimum support prices and government-controlled wholesale markets – so-called mandis – are currently rocking the country. While according to the OECD, farmers could profit from higher prices for their products in the free markets, many fear that a departure from government mandates will mean fewer guarantees and protections in the future.

Through keeping prices low in the wholesale markets and additionally helping consumers through programs like the Targeted Public Distribution System, which distributes food to poor families, the Indian government is saving consumers almost $80 billion per year. In Argentina, which has a similar distribution of agriculture support, farmers’ incomes were suppressed by roughly $12 billion, while consumers were aided to the tune of $8 billion.

As seen in the data, most country’s ag support works exactly the other way around – by guaranteeing farmers prices that are higher than the world market's and at the same time asking consumers and also taxpayers to step up and fill the gap. The latter can facilitate low consumer prices and help fund food assistance programs, effectively redistributing assets from wealthier citizens to poorer ones.

Yet, the details of how price subsidies to farmer engaging with the free market work and where they are capped also play a crucial role. While strict government control guarantees famers will get a minimum, price support against the world market has certain caps and limits depending on the country, potentially leaving a higher degree of financial uncertainty on the farmer. 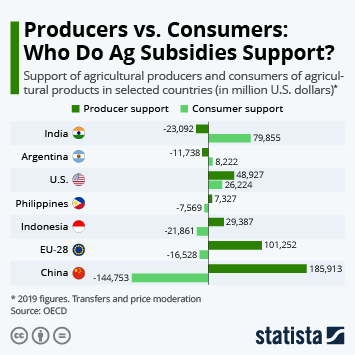 This chart shows the agricultural support in selected countries to consumers and producers (2019).