Published by Statista Research Department, Jan 26, 2023
The history of agriculture in India dates back to the Indus Valley civilization era, and even before that in some parts of southern India. India is a country with an agrarian economy, with over 54% of the country's land classified as arable and the agriculture industry comprising of half of the labor market. The agriculture sector is one of the most important industries in the Indian economy.
In terms of employment, the agriculture sector provides livelihood to over 151 million people. Approximately 60 percent of the Indian population works in the industry, contributing about 18 percent to India's GDP. This share decreases gradually with each year, with development in other areas of the country's economy. Agriculture and allied sectors which include forestry and fisheries contribute to over 24 percent to the country’s GVA.

India ranks among the leading countries in the world for the production of commodities like rice, wheat, cotton, sugar, milk, and horticulture. Since cereals are the most important food source for India as well as globally. Hence, the extensive global demand for cereals is fostering a great environment for the export of Indian cereal products. The production of cereals such as wheat, rice, millet, and barley are one of the country's primary contributions to the agricultural sector. Besides, cereals account for almost 46 percent of the Indian agricultural market. The annual yield of coarse cereals was 2,146 kilograms per hectare during the fiscal year 2021.

Horticulture and livestock production are gradually evolving farming in the agricultural sector of the country. With the increase in urbanization, rising income, and change in consumption habits, the demand for different types of fresh and processed products is rising. Thus, due to the increasing demand for organic food, organic farming has huge potential in the country. The overall total organic area was over nine million hectares with the central Indian state of Chhattisgarh occupying a majority of the organic farmland.

Even though farming makes up a large share of agriculture in the country, livestock rearing along with fishing also contributes significantly to feeding India's population as well as its economy. In the diversified farming economy of the country, livestock and agriculture has functioned simultaneous. India has not only the largest livestock markets but also is one of the leading aquaculture-producing countries in the world.

In the following 7 chapters, you will quickly find the 34 most important statistics relating to "Agriculture in India". 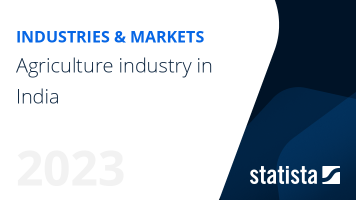 The most important key figures provide you with a compact summary of the topic of "Agriculture in India" and take you straight to the corresponding statistics.

Agriculture in the Philippines 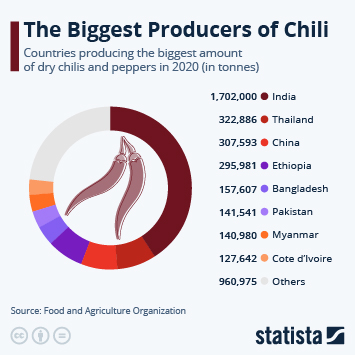 The Biggest Producers of Chilis 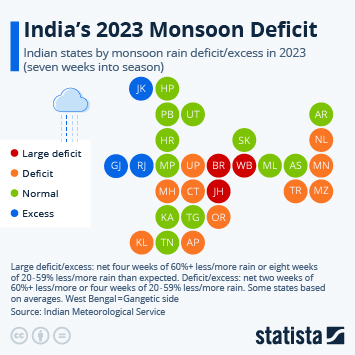