Social safety nets obviously vary as widely across the world as development status, but apart from that, different regions also show different preferences for whom they think most deserves to receive support from the government.

A new report by the International Labor Organization gives an overview of social protections around the world. Europe, as to be expected, is the continent where most people are covered by social protection. Here, more than 80 percent of children and new mothers can expect to be supported by their governments, as are 75 percent of injured workers and more than half of unemployed people.

In the Americas, benefits for the first three groups extended to between 50 percent and 60 percent of their populations, while unemployment insurance was less developed. Only 16 percent of the unemployed were able to claim benefits on the continent.

The share of those covered was generally lower in Asia-Pacific. Mothers with newborn babies, however, experienced a level of coverage far beyond other groups in the region. Almost 46 percent of them could expect support, compared with just 18 percent of all children and 16 percent of the unemployed. Arab states focused more on insurance for injured workers, out of whom 64 percent were covered, a much higher share than for new mothers (12 percent) or the unemployed (9 percent). Social safety nets covered the least people in Africa. Considering the low levels of protection, the continent still had a gap in the protection of the unemployed, with only 5 percent of them covered, compared to between 13 and 18 percent of other groups.

The report concluded that almost 47 percent of the world population was currently effectively covered by at least one social protection benefit, the most common being old age benefits. That number ranged from 84 percent in Europe to 17 percent in Africa.

Over the last century, more and more countries adopted social protection schemes through national legislation. Almost 100 out of 186 countries have now introduced them for seniors, survivors and the disabled, while around 90 have legislation concerning maternity. Children and families are explicitly covered in around 70 nations, while unemployment programs are currently national law in only around 50 countries. 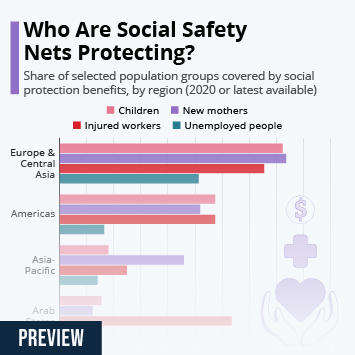 This chart shows the share of selected population groups covered by social protection benefits, by region (2020 or latest available, in percent).