NGO Transportation Alternatives, which devised the scheme, states that New York City has 6,300 miles of streets and three million free on-street parking spaces. The latter number surpasses the number of cars in the city by a third. While cars will probably remain a part of New York City (or any other city’s) future – in the form of buses, delivery vehicles or transport for the physically impaired, the idea that public resources should be freely available to those who chose to drive (and park) in major cities is losing ground.

Calculating the value of a city’s parking spots - including free parking - in U.S. dollars shows the massive size of the resources dedicated to driving and parking which have been long taken for granted. A 2018 analysis from the Research Institute for Housing America found that despite a high $6,500 per household spend on parking in NYC, the cost isn’t even as inflated as in other cities.

The report researched parking in five American cities and found that those located in regions that rely on cars more heavily, like the West and Midwest, have even more value tied up in parking spots. In Jackson, Wyo., a whopping 27 parking spots are provided per household, which is in part explained by the city’s tourism industry. Still, a survey of Jackson’s predominantly free parking in 2017 showed that many of spots remained empty even in peak tourist season. Summed up, parking spots had a value of more than $190,000 per household in the city. The analysis came to a similar conclusion in Seattle, where parking was worth almost $120,000 per household, but was also increasingly underutilized in recent years.

Despite New York City’s parking value per household being the lowest in the survey, it was the second-highest in overall terms at $20.6 billion, behind Seattle’s $35.8 billion. This goes to shows that New York City has parking that is very valuable overall but is already not being utilized by all of its many residents. This might put the city a better position for repurposing some of this space over more car-reliant locations like Jackson or Des Moines, Iowa. New York City also had the highest share of on-street parking in the survey at more than 65 percent of all of its parking, making a remodeling process impactful to pedestrians and bikers. The 25 percent share of car and parking spaces proposed to be converted for non-car use are equal to the size of 13 Central Parks, according to The Guardian. 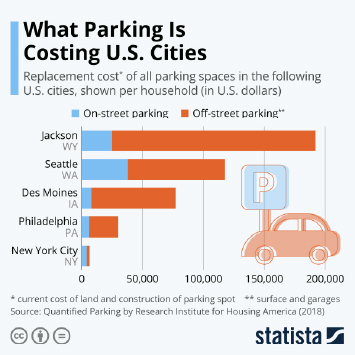 This chart shows the replacement cost of all parking in spaces in the following U.S. cities, shown per household in U.S. dollars.