88.9k
Deutsche Bank recently released their seventh annual survey of global prices and living standards, finding that rent for a 2-bedroom apartment can prove astronomical, depending on where you live. Someone moving to Hong Kong would be forced to fork over $3,700 in rent every month for a 2-bedroom apartment on average. The city is infamous for its soaring property prices and cramped living spaces. A 2016 government report found that 200,000 people across Hong Kong live in subdivided flats.

Another study released by Kwai Chung Subdivided Flat Residents Alliance found that people living in partitioned apartments in Hong Kong have an average living space of 50 square feet. That's half the size of a standard parking space and less that prisoners have in the city's maximum security prisons. Silicon Valley is also well known for its spiralling rents and an average apartment with two bedrooms there would cost $3,664 a month. Even though things are slightly better in New York, something similar in the Big Apple would set a renter back $2,854.

In many major European capitals, renters need deep pockets as well. In Paris and London for example, a 2-bedroom apartment would average $2,400 a month in rent. Even though Berlin was once labeled "poor but sexy" by its mayor, it is now home to the fastest growing propery prices of any city worldwide. At the moment, a 2-bedroom flat is still generally affordable at about $1,160 a month. Rents are far lower in developing countries, even in India's booming tech hubs. In Mumai, a 2-bedroom flat would cost $612 a month to rent while in New Delhi it would be $346. 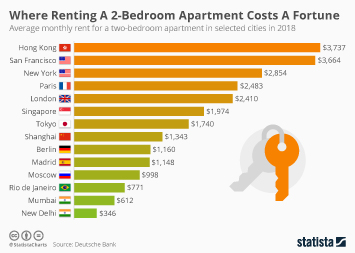 This chart shows the average monthly rent for a two-bedroom apartment in selected cities in 2018.

Cost of Living around the world